Among these was an online dialogue session co-organised in February with A Good Space (AGS), a cooperative of changemakers that encourages collaboration and innovation in the local community.

Insights from this online conversation were consolidated and presented at a subsequent event – The Ground Speaks: Budget 2021 Conversations – that saw the participation of over 100 individuals, including Nominated Member of Parliament (NMP) Dr Shahira Abdullah, Member of Parliament Mr Louis Ng, former NMP Ms Anthea Ong, and Leader of the Opposition Mr Pritam Singh. This event, which was held on 18 February, debated and discussed a key question: how could the Singapore Budget 2021 adequately address the needs of the country’s low-income communities? 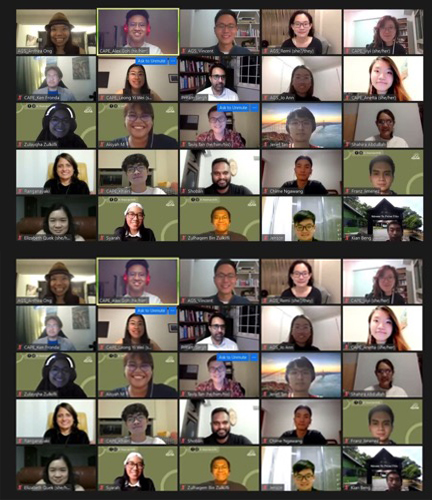 Screen grabs of the participants of the Zoom session. Images provided by CAPE.

For CAPE co-coordinator Alexander Goh (Class of 2022), this panel served as a conduit for regular citizens, changemakers and policymakers to converse. He said, “Civil society has long been a force for social good in Singapore. Any meaningful discussion of social issues has to put ground-up perspectives and experiences front and centre, and we’re grateful for the opportunity to facilitate a community-led dialogue between Parliamentarians and the people.”

The Parliamentarians in attendance welcomed the feedback. Dr Abdullah was optimistic about raising some feedback in Parliament. Similarly, Mr Ng noted that it is important for Parliament to have all the different views from the ground and “focus not just on dollars and cents of the issues, but the social side as well.” Applauding the organisers for putting together this dialogue, Mr Singh said that he now believes that the political discourse in Singapore is changing. 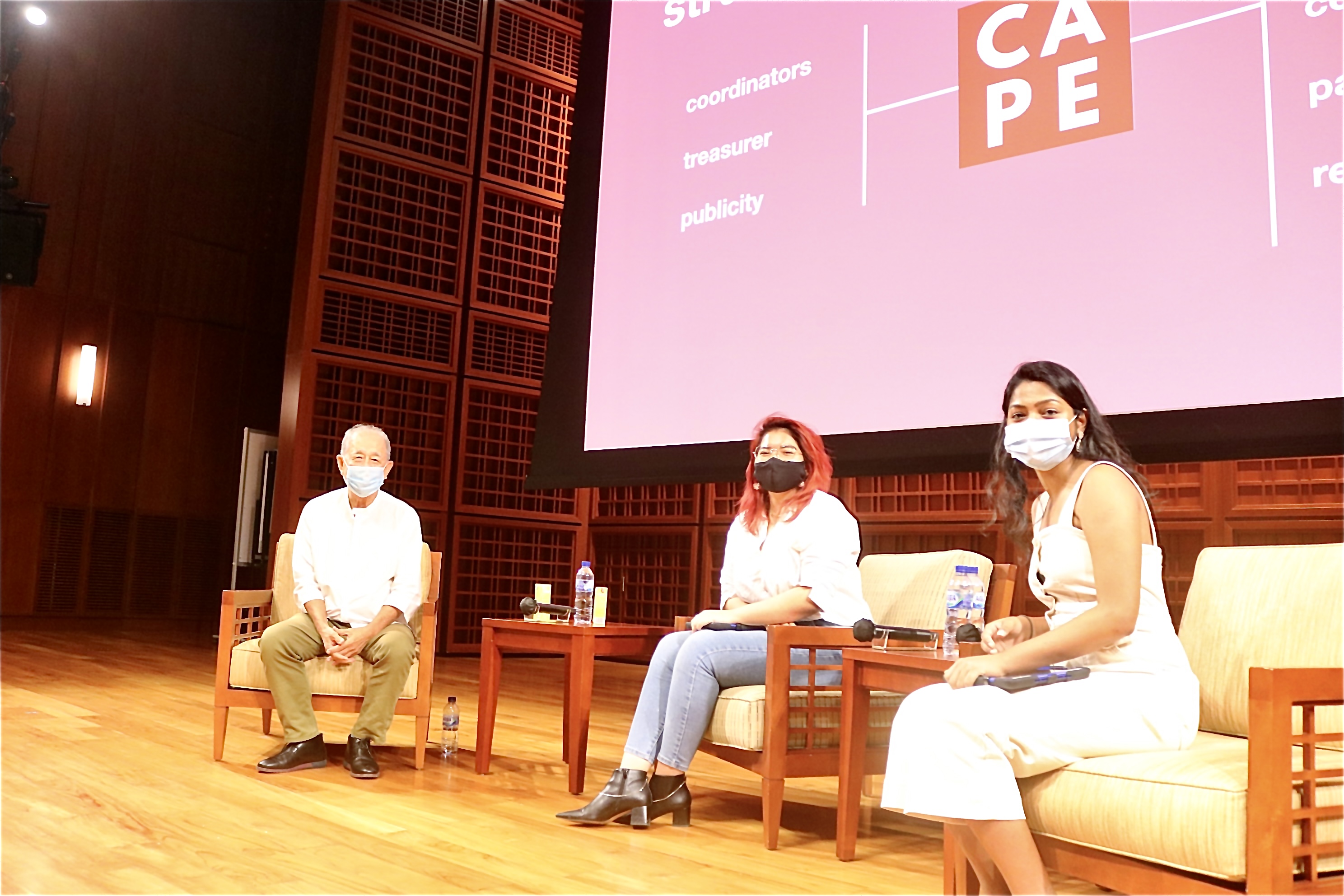 Other than engaging policymakers and changemakers in pertinent conversations, CAPE also drew on the knowledge of experts and academics. On 17 February, CAPE organised a discussion with Yale-NUS Professor of Social Sciences (Urban Studies) Chua Beng Huat that focused on topics of race, inequality and the new fourth generation leadership in Singapore.

One of the focal points of Prof Chua’s sharing was the multiracialism policy in Singapore, and how multiracialism is a “numeral concept”, rather than about true cross-cultural understanding and integration.

Commenting also on the issue of inequality, Prof Chua said, “People should be talking more about addressing issues of poverty instead of inequality––since poverty is an issue that can be solved, while inequality may not.”

CAPE co-coordinator Nur Aina Sapari (Class of 2023) shared that they decided to organise this talk to make academic concepts more accessible to new audiences. She elaborated, “Because of its complex nature, political theory can often seem daunting to many! Prior to this talk with Prof Chua, we spent almost a full semester studying his work and discussing it in a reading group sessions.”  This talk has provided a platform for students to discuss the prominence of Prof Chua’s ideas and teachings in Singapore’s present and future. 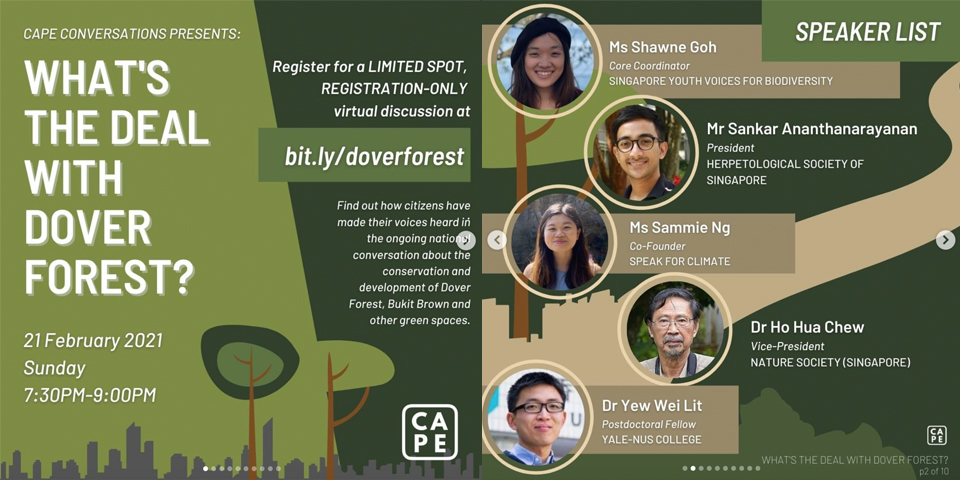 The last of CAPE’s online panel series was held on 21 February, where veteran conservationists, as well as academic and climate advocates were invited to discuss how concerned citizens could make their voices heard in the national conversation on the development of green spaces.

This conversation was largely motivated by the public debate surrounding the recent decision to zone Dover Forest, a site within Ulu Pandan, for residential development.

Reflecting on the history of conservation efforts in Singapore, the panelists noted that this “niche cause” is now much more widely championed by an increasingly diversified pool of actors.

They also described how conservation campaigns are now tying the value of green spaces to broader ideas of culture, values and patriotism, on top of protecting endangered biodiversity. The Singapore government has been placing a greater emphasis on environmental sustainability issues. In addition to announcing the Green Plan 2030, they have also increasingly focused on incorporating more public consultation in the developmental process.

While this panel found these trends generally encouraging, they also cautioned that several gaps still need to be addressed. They noted the risk of Singapore evolving into a technocracy and solely relying on technological solutions to address climate change, and encouraged parallel investments into nature-based climate solutions.

Finally, the panelists emphasised the importance of youth voices. Besides using Facebook groups, young people are using a range of other social media platforms like Twitter, Telegram, and even Tik Tok to push for change.

Reflecting on CAPE’s position in this wave of social change, Alexander is heartened by Singaporeans’ investment in social issues, noting that a culture of civic participation is well and alive in Singapore.

“The growing ubiquity and prominence of dialogues like ours reflect this. These events are only made possible with the combined efforts of the organising team, panelists and participants––all of whom show up because they cared about the respective causes,” Alexander said. “We hope to see this culture grow, and intend to contribute by making political literacy and civic discourse accessible to everyone.”