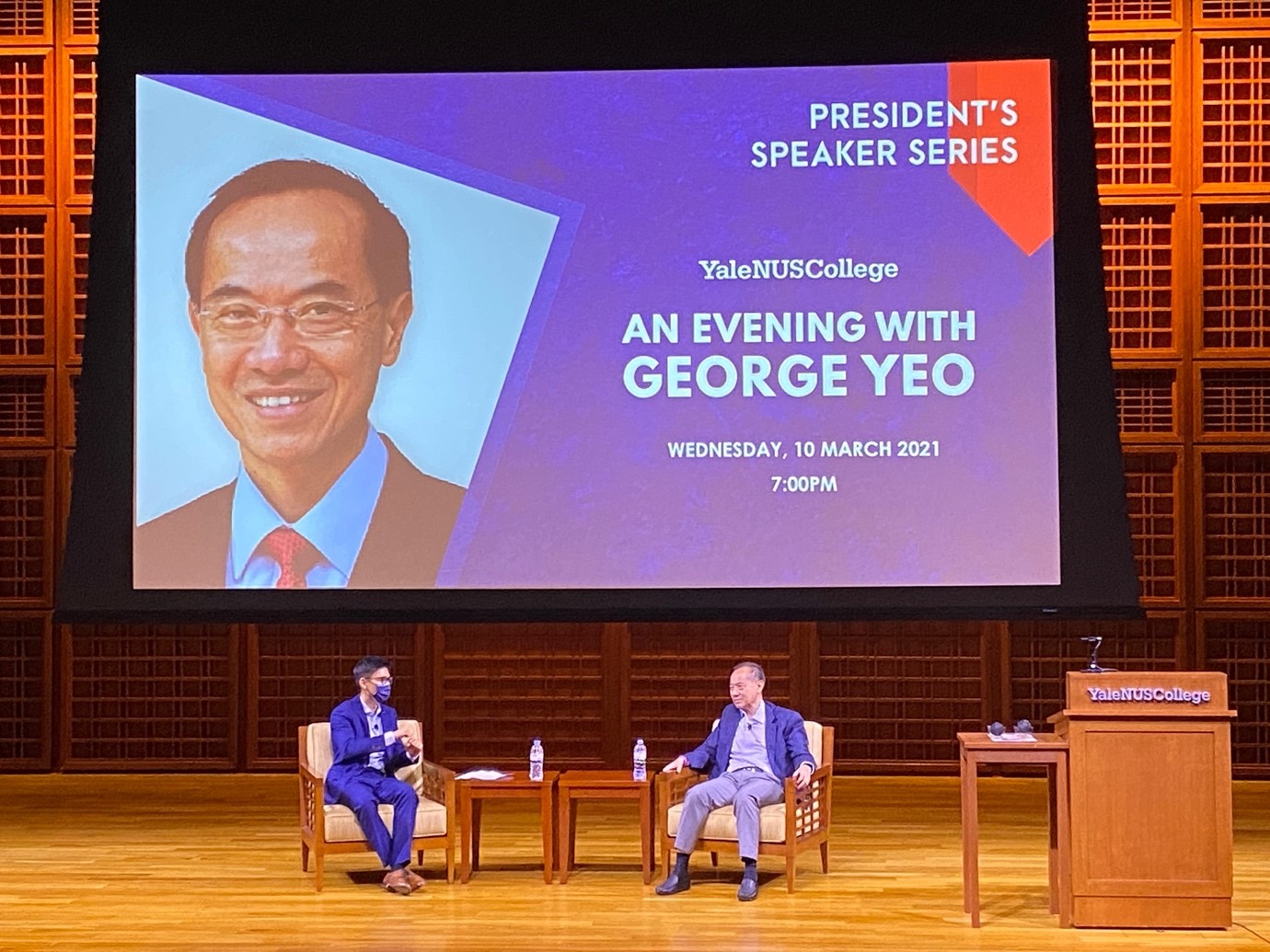 With growing pressures on political power and social systems, tensions within and among countries have risen over the last few years. From the recent Myanmar crisis to the United States-China rivalry, disputes are escalating and it has become increasingly pertinent to build trust and cooperation internationally.

Mr George Yeo, Singapore’s former Foreign Minister and Senior Adviser to Kuok Group and Kerry Logistics Network, stressed this at the Yale-NUS President’s Speaker Series held on 10 March 2021. The lecture series was launched in 2013 to enable the Yale-NUS community and those beyond to learn and engage with accomplished and influential experts on a diverse range of disciplines including contemporary world issues.

Taking the form of a dialogue between Mr Yeo and Assistant Professor of Social Sciences (Political Science) Chin-Hao Huang, the discussion covered key topics in international and regional relations in an increasingly globalised world. The hybrid event was opened to limited in-person seating in the Performance Hall, on top of being live-streamed on Zoom and Facebook.

Asst Prof Huang opened the dialogue by asking Mr Yeo for his thoughts on the COVID-19 pandemic and the various learning points one could take from it. In response, Mr Yeo shared how the legacy of the 2003 Severe Acute Respiratory Syndrome (SARS) outbreak had contributed to the effectiveness of several Asian governments in dealing with the pandemic, while the increase in “fault-finding” from the West towards China was symptomatic of an accelerated Western fear towards the rising power of China.

On the military coup in Myanmar, Mr Yeo mentioned that he was involved in ASEAN-Myanmar relations during the country’s tumultuous “roadmap to democracy” period post-2003, while he was Singapore’s Minister of Foreign Affairs from 2004 to 2011. Though he was “heartbroken” by the current situation, Mr Yeo remained convinced that the solution was not to demobilise the military junta as it would create even more chaos, unlike how the Western powers reacted to Saddam Hussein’s army in Iraq in 2003.

Responding to topics raised by both Asst Prof Huang and audience members, Mr Yeo shared his excellent knowledge and experience in the field of international relations, giving insights into the need to find common ground amidst differences and build cooperation among countries.

Citing Yale-NUS College’s unique approach of seeking out commonalities while respecting diversity, he highlighted that it was important that Singapore, continues to adopt a similar approach.

“Compromise has to be reached between states when it comes to disagreements in values, such as differing views on human rights,” Mr Yeo said.

“Find commonalities but respect diversity and if in the commonalities, we can live together, that is to be encouraged,” he added.

Students, who attended the lecture, said Mr Yeo’s perspectives helped them to broaden their understanding of global relations.

Referring to Mr Yeo’s optimism towards India-China relations by highlighting the two leaders’ appreciation of the cultural history in their respective countries, Alicia Kenisha (Class of 2023), a prospective Global Affairs major, shared, “I found Mr Yeo’s insights on India-China relations very interesting, particularly, this one anecdote about Prime Minister Modi and President Xi Jinping’s symbolic diplomacy in the middle of tensions between their two countries.”

“Mr Yeo also touched on ideas from various ‘-isms’ like realism and institutionalism in his talk. The interesting thing was that he didn’t wear one specific ideological hat, which I think just shows how messy international relations is in practice, and the many ‘levers and handles’ that go on behind the scenes,” Alicia added.

Christian Dimitrov (Class of 2022), a Philosophy, Politics and Economics major, said he jumped at the chance to hear Mr Yeo speak and added that the lecture allowed him to learn more about the state of affairs around the world especially amidst the coronavirus pandemic.

“When I heard that Mr Yeo was coming to Yale-NUS, I had to take this opportunity to learn more from his wealth of experiences in the Singapore government and his extensive knowledge on European Union-China and United States-China affairs,” he said.

“I personally found it insightful how he shared that the ongoing pandemic has accelerated history and divided the world into two parts. He also correctly highlighted that the longer the pandemic is with us, the more China will have a competitive advantage on the global scale,” Christian said.