During the Inter-College Games in February 2018, supporters of the Yale-NUS sports teams can now cheer by waving the brand-new Yale-NUS flag, which will be making its debut. Featuring two of the College’s key identity symbols – the Yale-NUS wordmark and Halcyon the College mascot, the Institutional flag is a significant symbol of identity for the young academic institution.

The idea for the Institutional flag was first suggested by Brandon Lee (Class of 2020), President of the Student Government, and the Athletics Council in 2017 who desired an official flag to be displayed at sporting events. After discussions with the Dean of Students office, the project was given the green light. Besides athletic meetings, the flag can also be displayed at institutional events such as conferences and symposiums.

The College’s Dean of Students office, Public Affairs department and the Student Government worked together for six months to design and produce the Institutional flag. During this period, the team invited the student community to share their views. A consensus on the design, which needed to portray an accurate reflection of the College, was established after some rounds of discussions.

Rachel Juay (Class of 2020), Director of External Communications for the Student Government, explained that students of varied backgrounds were roped into the project through small focus groups. Haroun Chahed (Class of 2020) oversaw the initial discussion of the flag design while she took over at a later stage.

“For simplicity and impact, our appointed designers recommended the white Halcyon keyline version as it displayed visibly sharper and more distinct lines. This accorded well with the design and gave the mascot an added sporty aggression,” explained Julian Low, Senior Executive at Public Affairs, who worked on the project.

Reflecting on her experience working on this project, Rachel remarked, “My experience with this project was fantastic. The highlight was definitely the fact that I got an opportunity to work closely with Public Affairs and saw the nitty-gritty details of how this flag came about. The biggest challenge on my part was making sure that the final product does justice to the Yale-NUS identity. Getting there required paying a lot of attention to the minute details, but overall, it was a rewarding project.”

Echoing parallel sentiments, Dean of Students Dr Christopher Bridges highlighted how the flag project was also a brilliant example of student advocacy dovetailing with College support and experience. “The students saw a need for one and the Dean of Students Office was proactive and able to grow the project. We were all able to rely on the expertise of the Public Affairs to realise it. It will be great to see Halcyon flying proudly on the flag!”

Alongside the Institutional flag, Yale-NUS also launched the College mace. The idea of having a Yale-NUS College mace was first conceptualised in early 2016. A customary feature in ceremonial occasions at institutions of higher learning, maces are symbols of authority. Each institution’s mace is uniquely designed, according to the character, features and aims of the institution. 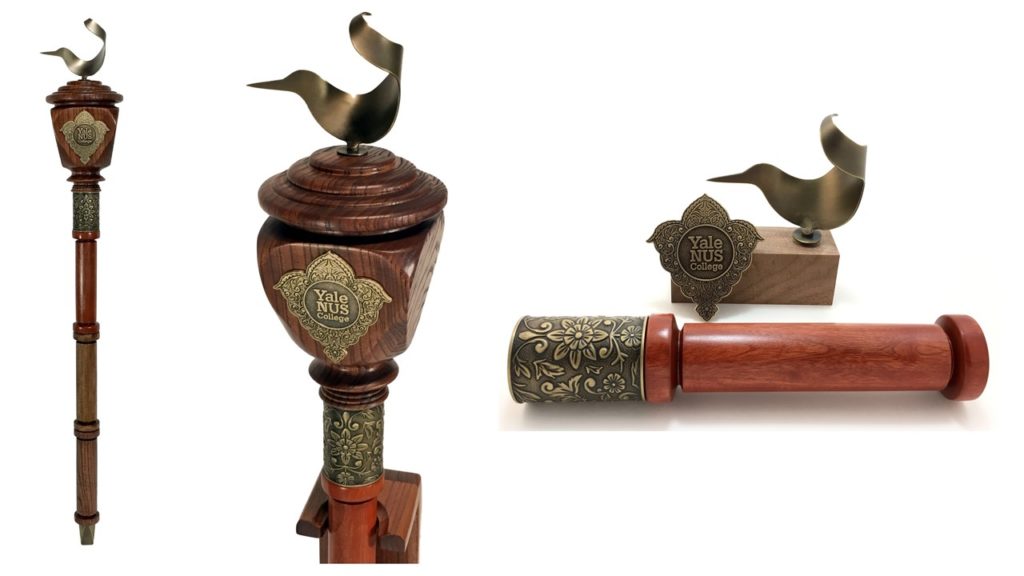 Like the distinctive Yale-NUS curriculum, the College mace incorporates both Western and Asian elements, combining the facets of each to form a connected and unified whole. Halcyon, the kingfisher, is rendered in metal sculpture and perched on the pinnacle of the mace. This encapsulates the core identity of the College as a young academic institution in confident ascension towards excellence.

On the shaft of the mace, the metal seal features an intricate piece of metalwork modelled on the traditional Southeast Asian craft of metal beating, and inspired by batik floral motifs and the intricate wood carvings of Asia. At the head of the mace, the pommel is constructed from elm, a tree which is traditionally associated with New Haven.

“When creating the mace, we broke away from the expected and were led by the youthful, creative, curious and adventurous spirit of the College. Like Yale-NUS, the mace is a completely original design. It is essential that the mace articulates the College’s mission, history and partnership through wood and art to reflect how the College is unique, distinctive and innovative,” said Senior Manager of Public Affairs, Ms Alyson Rozells.

The mace will make its first official appearance in the upcoming graduation ceremony of the Class of 2018.