By night (and on weekends) he holds two more – member of the legendary 1960s Singapore band, The Straydogs, and songwriter and member of rhythm and blues band, Blues 77.

It began in the unlikeliest of places. When Professor Ferzacca arrived in Singapore five years ago for a ten-month stint at the Asia Research Institute (ARI) of the National University of Singapore (NUS), he had a clear priority: to find out where the guitar shops were located in town.

His search led him down to the basement of Peninsula Shopping Centre, where he came across a shop called Guitar 77 and met the store’s co-owner, Mr Lim Kiang, who is a founding member of The Straydogs.

One impromptu blues jamming session later and Professor Ferzacca found himself one step closer to becoming the newest member of The Straydogs, and to the formation of Blues 77.

Five years on and with many jamming sessions under his belt, Professor Ferzacca is also on his way to finishing Sonic City: Making Rock Music and Urban Life in Singapore, a book based on his research of The Straydogs and their community of fellow musicians, family and friends.

“I am exploring the making of music as the making of urban life, following the past four years of ethnographic work that includes conventional methods of participant-observation with performance, with an attention to writing sound in order to understand the social life of urban space,” he wrote of his research in an article for ARI News, Issue 37, in March 2016.

“I’m an ethnographer and a storyteller, and I’m trying to tell the story of a community rather than come up with research findings,” Professor Ferzacca explained in an interview. 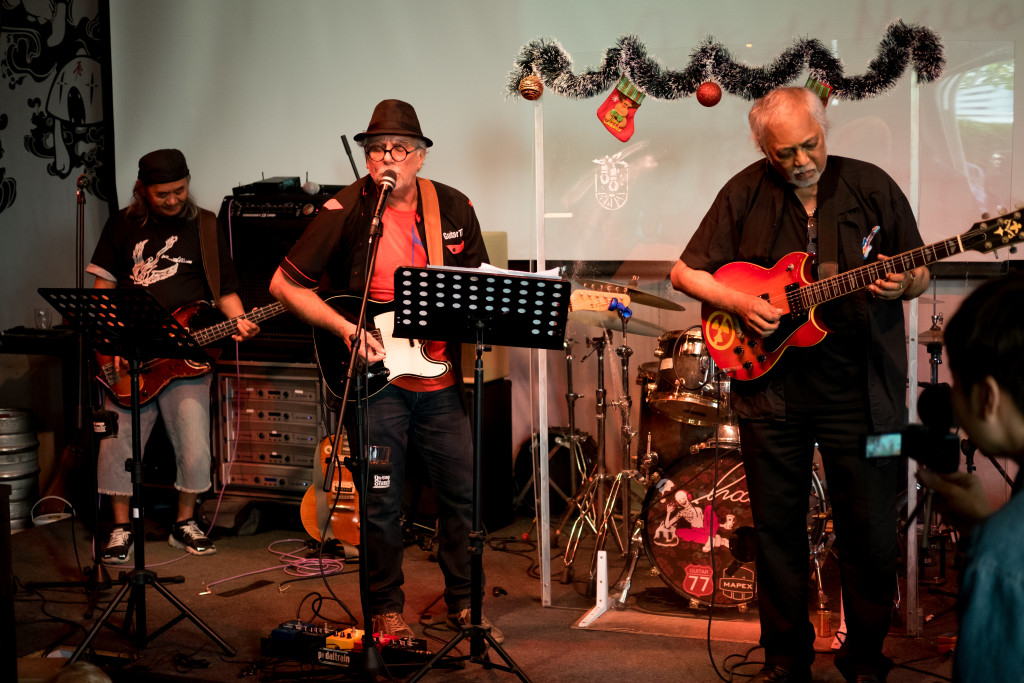 “I realised I was getting a different vantage point on life in Singapore, different from the stereotypical life and history,” he said. “Their lifestyles are out of tune with what Singapore holds up as the mainstream and they may not be productive in a way that fits into a capitalist world – but they are productive in their own ways of making music.”

Slated to be reviewed for publishing in 2017 by NUS Press, Sonic City is motivated by academic and personal interests. Professor Ferzacca performs regularly with both bands, which functions as both fun and fieldwork, even travelling overseas to perform with The Straydogs. They have shared their music with hundreds of fans from Ho Chi Minh City in Vietnam, to Malacca and Kuala Lumpur in Malaysia, and at the Esplanade in Singapore.

More recently, in celebration of The Straydogs’ 50th anniversary, Professor Ferzacca and the original 1960s line-up of the band played a gig to more than 350 people at Hood Bar and Café on 4 December 2016, alongside Blues 77 and other local bands such as Pests Infested.

“It’s a way of being in the world that I find really open; it’s a way of knowing the world through sound,” Professor Ferzacca said. “I’m calling this a sonic ethnography, where sound is at the very centre of how these people organise their lives and come to understand the world.”

As a songwriter for Blues 77, Professor Ferzacca has written many songs inspired by daily living in Singapore. For instance, ‘Shiok Lah!’ was written about his first time experiencing kaya toast, a local breakfast staple, while ‘On the Doghouse Floor’ describes Professor Ferzacca’s sudden fainting episode while the band was jamming.

“I passed out, and of course they all freaked out and called an ambulance, so we wrote the song to describe the whole event – and this has now become one of our favourite songs,” recounted the 62-year-old with hearty laughter.

“I do much of the writing [for Blues 77], inspired by my relationships with Kiang and James [Tan, another member of The Straydogs]. As I write, I’m always talking with them as I work out chord changes and et cetera.”

Professor Ferzacca has had two stints at ARI as Visiting Senior Research Fellow of their Asian Urbanisms Cluster, and is an Associate Professor of Anthropology at the University of Lethbridge in Alberta, Canada.

More widely known as a medical anthropologist, his previous research has focused on urban medicine and chronic disease in Yogyakarta, Indonesia, where he conducted fieldwork over 17 years. It was in Yogyakarta where he first forayed into sonic ethnography, when he encountered kroncong music in a kampung (village) and explored the social aspect of making music.

Similarly, Sonic City is a project that is both about music and social ties, of using songs to understand and bond within a community.

“Writing the songs and writing about the centrality of sound in a community as a way of knowing the world – that’s what I hope the book will be… It’s beyond a researcher-subject relationship, it has become friendships that are pretty solid,” Professor Ferzacca said.

“They have each other’s back. That’s not something that I’ve always experienced that I find very interesting in this community,” he added. “It’s these kinds of things – the strengths and bonds in the community that I hope also comes across in the book.”