In early December 2015, a group of 13 students from the Yale-NUS Habitat for Humanity Chapter embarked on an overseas trip to New Delhi, India, for one week. The trip, called a ‘Build’, extended a helping hand to low-income families living in the Bawana slum resettlement colony by helping to build homes.

Bernie Chen (Class of 2018), who was the Build Leader of the group, said that the trip was a great learning experience.

“There were so many people to meet, flights to book and needles (vaccinations) to be jabbed,” he said. “It was difficult at first…but it was rewarding to see that, during the trip, it was all coming together.”

In order to raise money for the trip, members organised a ‘Steps for Change’ challenge, during which participants committed to walking barefoot for three days, and set up a booth on campus where members of the Yale-NUS community could purchase homemade cookies and Habitat for Humanity postcards. A few members of the group also performed in a fundraising music concert titled ‘Brick by Brick’.

The group managed to raise an impressive S$12,000 in total through these events. It also attained further funding from the school administration and three corporate sponsors.

While in New Delhi, the team was involved in the building process for several homes scattered around the Bawana colony. They also had the chance to learn how to make plaster, mix cement and forge closer bonds with one another by forming ‘human chains’.

“I’ve always known that I wanted to [embark on a trip] like this, and that social work was my calling,” said Dave Lim (Class of 2019), one of the Bawana Build participants. “What I took away the most is the resilience and warmth of their community – the homeowners and labourers alike worked tirelessly every day, rain or shine, winter or summer. [In spite of] the busyness of their work, they still offered us chai (tea) and welcomed us to work with them.” 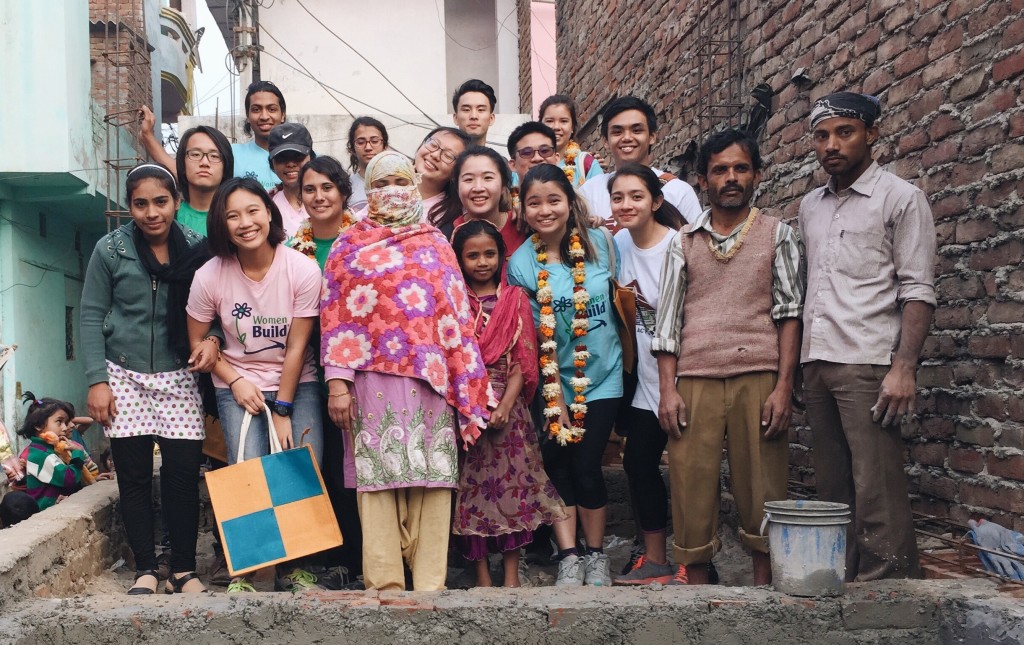 The group also held an exhibition about the Bawana Build in March in 2016 to raise awareness that such trips do have long-lasting impact on the local community and are not exploitative in nature.

Yale-NUS Habitat for Humanity Chapter was founded in August 2015 by Hannah Yeo (Class of 2018), former President, and Daryl Tan (Class of 2017), Vice-President.

Despite its relatively recent inception, the club has been busy with a flurry of activities this past academic year. For instance, the executive committee organised a panel on ‘voluntourism’ that featured distinguished speakers such as Mr Yong Teck-Meng, National Director of Habitat for Humanity (Singapore), Ms Phua Huijia, Founder & Managing Director, Skillseed, and Ms Susan Edwards, Head of Global Concerns, United World College of South East Asia (UWCSEA).

One of their most notable projects is Project HomeWorks, a one-day cleanup of low-income rental flats in Singapore that are in dire living conditions. The organisation welcomes both members and ad-hoc volunteers to participate in the project.

It was, in part, due to their experience in cleaning low-income flats locally that they were inspired to do an overseas Build.

“After Project HomeWorks, we thought that embarking on the Bawana Build would be a good way to compare the different faces of poverty in a country other than Singapore,” said Hannah.

The decision to organise an overseas build in India was also a “blend of cost and efficiency,” she added. “Some of the builds that were [geographically] closer, such as Thailand, were actually more expensive due to higher material and transportation costs.”

However, the club has yet to decide if such overseas builds would become an annual event for the organisation.

“[The executive committee] wants to focus on Project Homeworks as we think that it is something that is more accessible financially,” she explained. “We also want to cultivate a culture of service within the Yale-NUS community first.”

She added that the chapter would like to do future Builds if they are able to support it financially. Currently, they are considering doing annual Builds in Johor Bahru, Malaysia, and Batam, Indonesia.

For more information on the Yale-NUS Habitat for Humanity Chapter, or to find out more about volunteering, check out their Facebook page.