7 August 2018: Professors at Yale-NUS publish their research and writings

As a liberal arts and sciences college, Yale-NUS encourages undergraduate learning through close student interaction with professors and leading scholars. In addition to this commitment to teaching, Yale-NUS professors also tackle important issues in the academic world through publishing their own writing and research.

Faculty members conduct research in many diverse fields. Most recently, Associate Professor of Humanities Matthew Walker published his book Aristotle on the Uses of Contemplation, which examines Aristotle’s views on the happiest life for human beings from the perspective of Aristotle’s psychology and biology.

The book, which was just published in June this year, had its main ideas sketched out when Assoc Prof Walker was a graduate student at Yale. He revised and expanded his doctoral dissertation, which eventually led to this book.

“On the one hand, Aristotle thinks that the happiest life is focused on philosophical contemplation. Such contemplation, he thinks, is altogether choiceworthy for its own sake, and lacking utility for higher ends. On the other hand, Aristotle thinks that living organisms possess only useful parts and capacities, which beneficially maintain those organisms’ lives. So, if philosophical contemplation is as useless as Aristotle suggests, then why should human beings, as living organisms, have capacities for contemplation? How can useless contemplation be central to the human good? Those are the central puzzles that the book explores and resolves,” Assoc Prof Walker shared.

He also noted that a Yale-NUS Visiting Fellowship enabled him to do research at the Bodleian Libraries at Oxford University while he was working on the book, which he found very helpful.

Assoc Prof Walker teaches Philosophy and Political Thought (PPT), one of the Common Curriculum courses at Yale-NUS, in which students read about Aristotle’s views about the happiest life. He also teaches seminars on Aristotle and ancient Greek Philosophy, and found that the book is tightly connected with his teaching.

“Ultimately, my book offers one way of understanding how we might benefit from the liberal arts and sciences—arts and sciences that are worth pursuing just for their own sakes, independently of their practical utility. Reflecting on the value of liberal studies is a big part of life at Yale-NUS.”

Another faculty member specialising in Philosophy in the Humanities Division and who also teaches PPT is Assistant Professor Malcolm Keating, who wrote the book Language, Meaning, and Use in Indian Philosophy on the fundamental question of how human communication works, with a philosophical introduction to an early tenth century text.

In the forthcoming book, Dr Keating translated the work of an ancient Indian philosopher, Mukula Bhatta, from the classical Sanskrit language, which greatly influenced many modern South Asian and Southeast Asian languages, to English. He analysed the ideas of Mukula Bhatta, who explains how people understand a wide range of meanings from speech, such as how speakers can go beyond the ordinary meanings of words to communicate with metaphors, irony, and other phenomena.

Dr Keating said, “In writing this book, I hope to make more Sanskrit philosophy available in English to philosophers, linguists, literary theorists, and South Asianists, since there is so much sophisticated premodern Indian thought yet unexplored.”

Dr Keating’s research is centred on Indian philosophy, in particular Mīmāṃsā and other orthoprax Indian traditions. His focus is on the philosophy of language and related topics such as epistemology and logic. Dr Keating is concerned with how hearers interpret non-literal speech acts, the epistemic status of testimony, and the relationship between inferential and interpretive principles. His work seeks to cross cultural and disciplinary boundaries, drawing on both Sanskrit and Anglophone philosophy, and engaging with philosophical, aesthetic, and grammatical traditions in India.

On the impact of his teaching experience at Yale-NUS on his research, Dr Keating shared that teaching Chinese thinkers in PPT encouraged him to expand research into Chinese philosophy as well.

“A liberal education model such as ours [at Yale-NUS] allows one to develop modules in which different forms of creativity can be studied together,” noted Rajeev S Patke, Director of the Division of Humanities and Professor of Humanities (Literature). Professor Patke, received his postgraduate degrees in Modern English and American Literature from Oxford University on a Rhodes Scholarship. 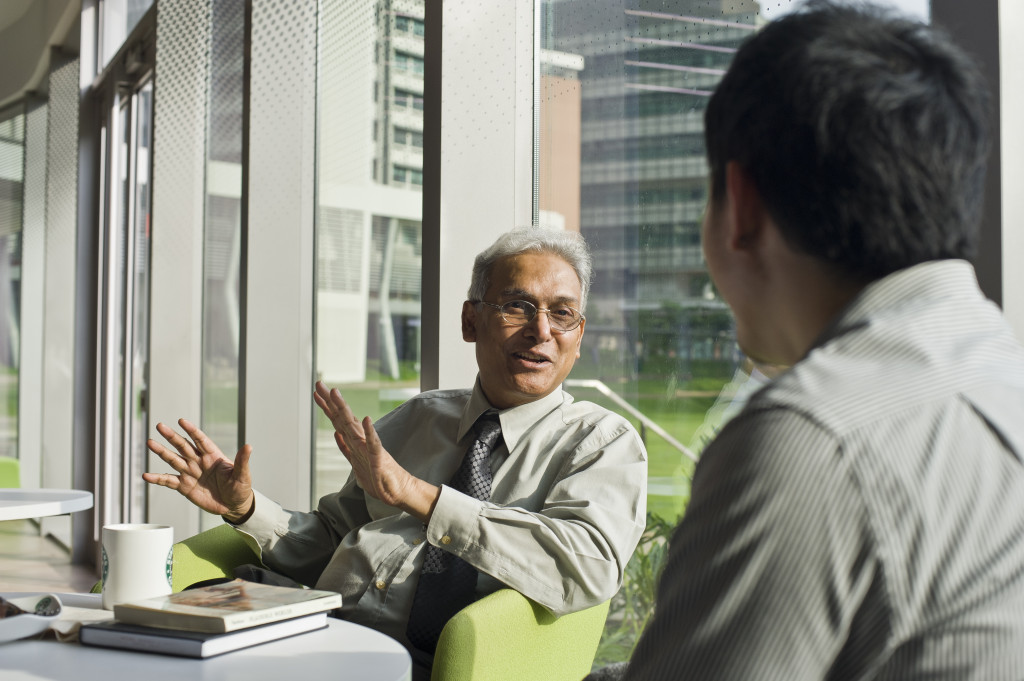 Professor Patke’s research interests include postcolonial and modernist writing in English, the works of Walter Benjamin, and the relation of poetry and painting to the idea of representation. He said that this flexibility in academic creativity has enabled him to combine his focus on literature with a focus on arts such as painting, photography, and music. Professor Patke recently published his book Poetry and Islands: Materiality and the Creative Imagination, which explores the interaction between island experiences and the literary genre of poetry.

The book explored how islands become repositories of human longings and desires, a locus for some of our deepest fears and fantasies. It balanced historical and geographical reference with a selective approach to poems and poets in English, and in translations into English. Prior to Poetry and Islands: Materiality and the Creative Imagination, Professor Patke has authored four other books.

In addition to the impact of their teaching on undergraduate students, the academic work of these professors will further contribute to the growing research impact of Yale-NUS faculty and scholars.