Last semester, Yale-NUS College held the inaugural Kingfisher Awards to recognise the outstanding contributions of student leaders, student organisations and staff to the College community and the surrounding community. The event was held at the Yale-NUS performance hall and organised by the Campus Life team from the Dean of Students Office (DOS). A total of 14 awards were handed out at the event.

The nominations, which could be submitted by anyone within the Yale-NUS community, were evaluated by a committee made up of faculty and staff.

The Outstanding Student Organisation Award was awarded to the Women in Business (WIB) student organisation for their innovative and diverse programmes. The Yale-NUS Chapter of WIB was established in August 2017 to provide a network of support for women interested in Finance, Tech and Entrepreneurship. In collaboration with other student organisations from the College and the National University of Singapore, WIB organised three large-scale events that ranged from a panel discussion, a conference and a social enterprise fair. These were in addition to multiple exclusive office tours, workshops and mentorships rolled out for the students.

“Receiving this award shows how supportive the Yale-NUS community is towards our cause. It is something that we are all passionate about, and we are glad that discussions of diversity and inclusion have been included in the business atmosphere of Yale-NUS,” shared Betty Pu, President of WIB (Class of 2020).

Meanwhile, the Outstanding Student Organisation Programme award was presented to ‘Project Homeworks’, an initiative organised by the Yale-NUS Habitat for Humanity Campus Chapter (Hfh) student organisation. It is a service-oriented organisation which seeks to mobilise young people to eliminate poverty housing from the world. Under ‘Project Homeworks’, volunteers from the College help rehabilitate and clean homes for underprivileged or physically disabled tenants.

“Each ‘Homeworks’ session is a real labour of love. Volunteers have to sacrifice their Saturdays to clean these homes. This is our third year doing this and it is immensely encouraging to be recognised for all the work we’ve put in throughout the years,” said Darren Lee (Class of 2020), President of Hfh. In the next academic year, Hfh is looking into novel collaborations with the Urban Studies Faculty. “Many of our members have learnt a lot about the theories, research methods or policy ideas related to poverty. We’re working with some faculty to apply our knowledge and create an impact evaluation framework for us to learn how we can better help our beneficiaries.”

Senior Admissions Counsellor Mr David Royster was awarded Advisor of the Year while Executive Ms Marilyn Tan from DOS was given the Unsung Hero award.

“As the advisor to the Yale-NUS African, African-American and Afro-Caribbean Society (YAAAS) student organisation, my role was to guide and advise them to ensure that their activities are aligned with the missions, goals and objectives of the College,” said Mr Royster. He is especially proud of the Black History month event that was organised by YAAAS earlier in February, where the rich heritage and histories of Black diaspora were celebrated through film screenings and a host of activities. “Although I was actively involved in the planning of this event, huge credit should go to the students for enduring many sleepless nights to pull this off,” he added. For Ms Tan, her work involves the organisation and coordination of activities supported by DOS. This includes, but is not limited to, behind-the-scenes work of supporting student organisations.

“I never expected to be nominated, let alone win the award for assisting student organisations with their finances and logistics. I think it is extremely motivating and encouraging for staff and faculty to be recognised for the work that they do for the students and the community,” added Ms Tan. 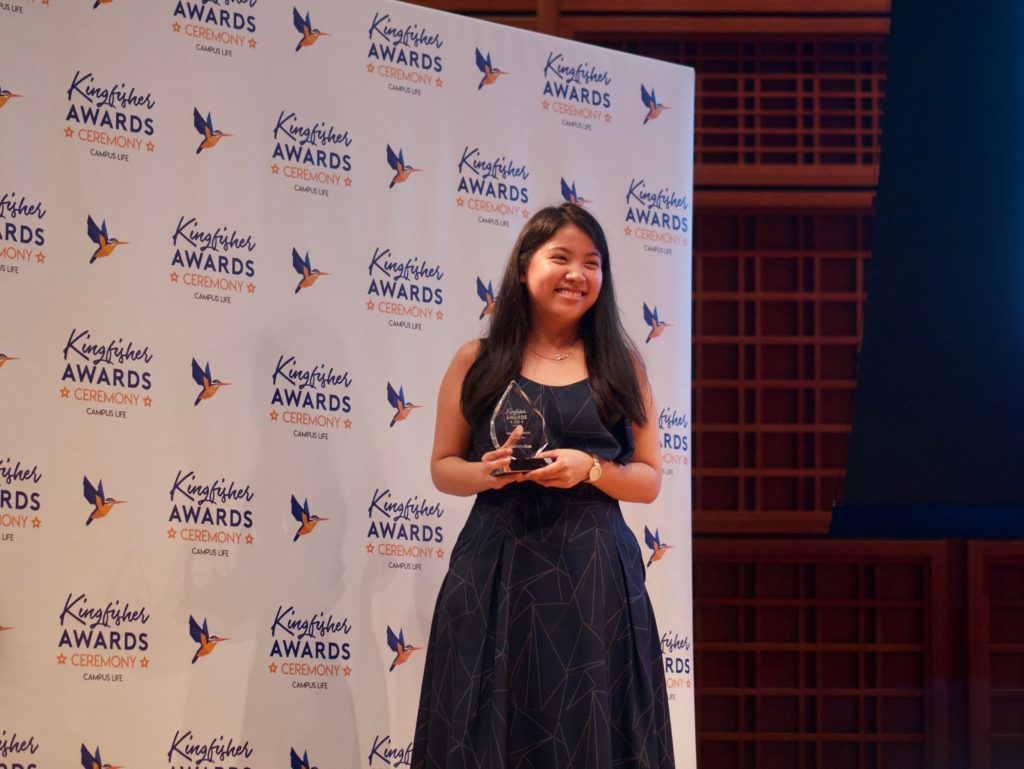 With the inception of the inaugural Kingfisher Awards, it is with great hope that student leaders, student organisations and supporting faculty and staff continue to strive towards excellence in enriching the Yale-NUS community.

More information on the Kingfisher Awards list can be viewed here