For the love of language, and more

View of the Port of Alicante, Spain, where Zhi Wen spent her summer learning Spanish. Image by Yap Zhi Wen

With more than 400 million people speaking the language, Spanish is the second most widely spoken language in the world. For three months last year, five Yale-NUS students dedicated their summer break to studying the Spanish language at language schools around the world. With the support of Yale-NUS College’s Centre for International and Professional Experience (CIPE), these five recipients of the Santander International Experience Scholarship all had one goal in mind – to acquaint themselves with the language not by merely learning it through textbooks, but by immersing themselves in an environment with native speakers.

The students had varied experiences as they chose to pursue their love of the language in different parts of the Spanish-speaking world. Prior to embarking on the Spanish language programme, Kinnari Sahita, Class of 2017, had taken Beginning Spanish 1 for one semester. However, studying the language on a Council for International Educational Exchange (CIEE) programme in Argentina, which was funded by the Santander International Experience Scholarship, was an experience on a whole new level. Reflecting on her time in Argentina, Kinnari shared that it was ‘truly immersive’ as she was exposed to Argentinian culture beyond the classroom, and had the opportunity to practise her Spanish in a real-life context.

“Flying to the opposite side of the world and living in a city where you barely know the language may seem intimidating at first, but it was an amazing experience and I would do it all over again if I could,” Kinnari shared fondly. Yap Zhi Wen, Class of 2017, went to the University of Alicante in Alicante, Spain. A complete beginner to the language, Zhi Wen committed to speaking only Spanish as soon as she stepped into Spain. While this was initially a challenge, Zhi Wen was soon able to interact with her peers in conversational Spanish as she had to communicate with her local host family on a daily basis.

“I have always wanted to learn a foreign language and there is no better way to do so than to immerse myself completely in a country that only speaks that language,” Zhi Wen shared. “I hoped to throw myself into the unknown, travelling alone into a country where I could barely understand everyone around me at the beginning, hence challenging myself to be independent and adaptable. 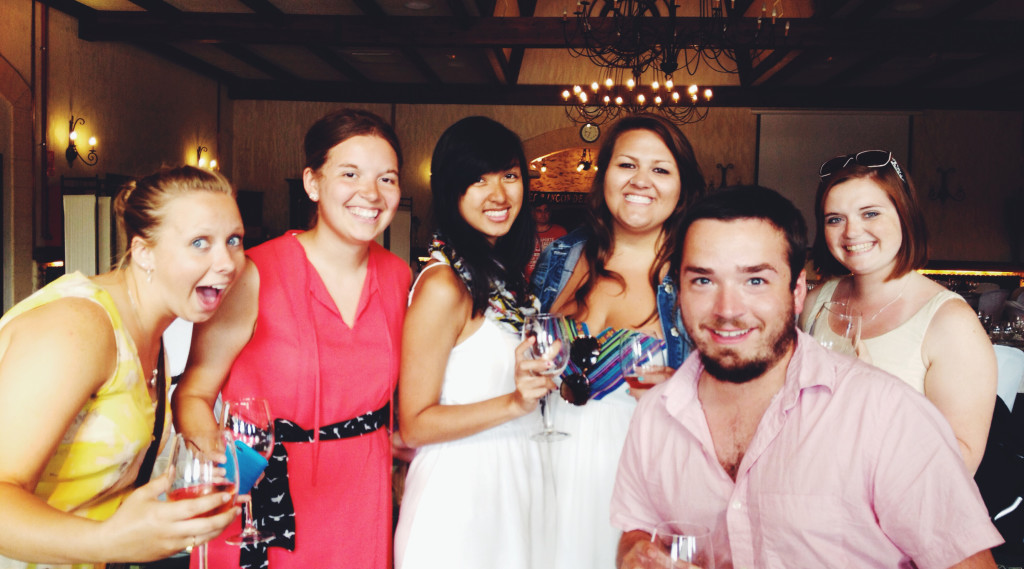 Zhi Wen, with the friends she made in Alicante while immersing in the Spanish language. Image by Yap Zhi Wen

For many of the students, summer language school was more than just the study of the language. During their time at the language schools, some students also took the chance to pursue their personal interests to maximise their learning opportunities in their host countries.

Zhi Wen, who is also a budding and talented artist, took the opportunity to travel to neighbouring regions during the course of the programme, where she sketched the scenes that she encountered. As an Arts and Humanities major and the founder of the Visual Arts Society (VAS) at Yale-NUS College, Zhi Wen has had extensive experience holding informal drawing lessons for her peers and organising arts exhibitions showcasing the work of VAS members and the Yale-NUS community. Her time in Spain was an enriching source of inspiration for her artistic endeavours. The main boulevard in Alicante, Spain, a scene Zhi Wen walked past daily while she was on the programme there. Image by Yap Zhi Wen

Similarly, Shanice Nicole Stanislaus, Class of 2017, pursued her love of dance while she was in Spain. A co-founder of OneheART, a student organisation that uses arts as a medium for outreach and community service, Shanice spent the summer learning flamenco with an experienced practitioner. Inspired by her experience in Spain and her fascination with the history of flamenco, Shanice worked together with a group of fellow Yale-NUS classmates to produce a short film titled Duende, which explores the spirit of flamenco as it exists in Singapore. The team, comprising Shanice, Reuben Su, Stacey Yuen and Timothy Chua, also from the Class of 2017, filmed and edited the original short film, which won the European Union Centre Short Film Award 2015.

For Shanice, the true value of the experience was how it opened up many more doors for her. Upon returning to Singapore, she continued to practise flamenco and is currently a performing artiste with the Flamenco Dance Theatre Company. Her grasp of the Spanish language, attained over the summer, enabled Shanice to more effectively harness the opportunities back in Singapore. Empowered by the ability to speak a new language, Shanice has opted to study Spanish as an elective so that she can continue learning and improving.

This summer, a new group of ten Yale-NUS students are currently abroad on Spanish summer language programmes made possible through the Santander International Experience Scholarship, which supports exchanges, overseas internships and professional experience for students.