Founded in 1915, YSPH is among the oldest schools of public health in the United States. Yale-NUS undergraduates can apply for the concurrent degree programme in their third year. Students in the CDP spend the first semester of their fourth year at YSPH and return in the fifth year to complete the full programme.

Victoria developed an interest in public health early on during her time at Yale-NUS College. Over the summer after her sophomore year, she was in Swaziland as part of a Yale Summer Session Abroad titled “Visual Approaches to Global Health”.

Taught by Jonathan Smith, a Lecturer in Public Health (Health Policy) at YSPH, the novel global health course explored the intersection between public health and visual media. Victoria shared that the summer programme was a “key highlight” that led to her taking up the CDP to focus on the area of public health and acquire more skills.

During her time at YSPH, Victoria also worked with various public health and medical experts as a research assistant. This included Associate Professor of Public Health (Social and Behavioral Sciences) Joan Monin and Research Scientist in Nursing Dena Schulman-Green at the Yale School of Nursing.

For Jocelyn, the time at YSPH has been “both challenging and very rewarding”.

“I think that the classes I’ve taken in my fifth year have been a highlight. I had more room in my schedule for elective courses, which gave me the opportunity to take classes that align with my deep interest in women’s sexual and reproductive health,” she shared.

Students on the CDP complete their capstone in their fifth year. This was also another highlight over the past year for Jocelyn, who had the opportunity to continue researching on a topic she had been interested in since her third year.

“For my capstone, I expanded upon a topic that I’ve been researching since my third year at Yale-NUS — the relationship between menstrual hygiene management and educational attainment. As the statistical method that I used to explore my question was one I had never used before, it was daunting for me at the time,” she said.

“The process of writing my paper, giving my thesis presentation, as well as simply learning that new method was extremely gratifying.”

On her future plans, Victoria shared that she will be enrolling in the Doctor of Medicine (MD) programme at Duke-NUS Medical School (Duke-NUS) in Singapore.

For Jocelyn, she will be taking some time to pursue her long-time passion, dancing, before embarking on a professional career.

“I’ll be traveling to France with my dance company in summer — we’ll be performing at Disneyland Paris, which is definitely something to look forward to,” she shared.

“Further down the road, I hope to be involved with research and advocacy surrounding reproductive health rights. Although my interest has been in global health, I am now seeking to become more involved with local organisations in light of the current political climate in the United States. I think of these plans as a continuation of all that I’ve learned as a Global Affairs major and student of public health.”

A Yale-NUS student currently enrolled in the CDP is Scott Currie (Class of 2018). Having spent a semester at YSPH, he is now in New Haven to complete his final year of the programme. Scott was also offered a Bataua Scholarship to support his final year of studies. 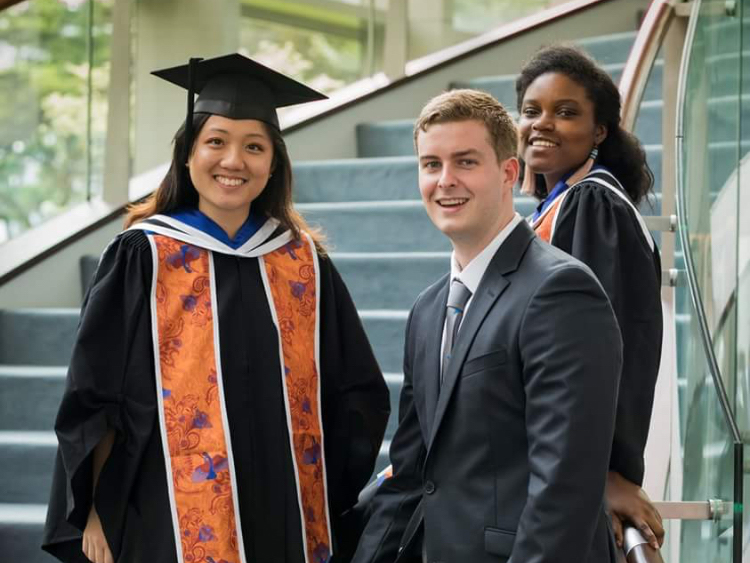 Scott Currie (centre of photo) at the Yale-NUS College Graduation Ceremony held on 29 May 2018. Image provided by Nana Essilfie Jr..

On why he decided to take up the CDP, Scott shared that the “intertwining of different disciplines and analysis of foundational human concerns” at Yale-NUS served as “a perfect crucible for developing an interest in as broad a topic as public health and healthcare”.

“The emphasis on a ‘toolbox style of thinking’, that is the ability to think, analyse and articulate has also been invaluable to navigating the Master’s programme,” he added.

As an undergraduate, Scott had conducted research with faculty from both Yale-NUS and Yale University.

“These experiences enabled me to reach out and experience larger-scale public health work. They also alloyed well to a graduate school experience as they give me a firmer practical understanding of how research and policy operate in the real world,” he shared.

To support students in their pursuit of different academic interests, Yale-NUS has established multiple concurrent degree programmes with institutions affiliated with either Yale University or the National University of Singapore (NUS). This includes the Concurrent Degree Programme with Lee Kuan Yew School of Public Policy and the Concurrent Degree Programme with Yale School of Forestry and Environmental Studies.