By Jessica Teng | Images as credited

Shernice (front row, first from left) with the Pro Bono Group at a meeting with Bangladeshi migrant workers to raise awareness about salary matters and compensation for injuries suffered during work. Image provided by Shernice Soh.

Shernice Soh (Class of 2020), a Wu Hsioh Kwang Family Scholarship recipient, is enrolled in the Double Degree Programme in Law and Liberal Arts jointly offered by Yale-NUS and the National University of Singapore Faculty of Law. She divides her time between her study of the law as well as liberal arts, and appreciates the opportunities that the scholarship has offered for her to engage fully with both disciplines through the programme.

“The Wu Hsioh Kwang Family Scholarship has allowed me to explore my interests without having to worry financially,” Shernice said. “I like the programme because it provides me with a good balance between the rigour of law school and the breadth and freedom of Yale-NUS. I love the community spirit at Yale-NUS ,especially how we are encouraged to explore new things and interests without fear of judgment or failure.”

Having primarily spent her first year at Yale-NUS, Shernice has now branched out to participating in activities within the NUS Faculty of Law. Her involvement with its Pro Bono Group has led her to conduct a variety of community outreach events. These range from workshops that educate migrant workers on their legal rights under the Work Injury Compensation Act, to interactive funfairs with SMRT bus drivers.

“I am very passionate about organising pro bono projects, especially those that focus on the welfare of migrant workers,” Shernice said. In addition to her current work with the Pro Bono Group, she is also working on a collaboration with the NUS Yong Loo Lin School of Medicine that aims to provide medical services to them. “The project also hopes to raise awareness of legal aid avenues so that the workers know where they can get help,” she added.

Outside of academics and volunteerism, Shernice was also an avid member of the Yale-NUS Netball Team in her first year, competing in both the Inter-College and Inter-Faculty Games. Although she spent time attending classes at both campuses, she remained closely connected to her residential community at Yale-NUS through her involvement in RC^3, a student organisation that aims to foster closer ties among the College’s three residential colleges. 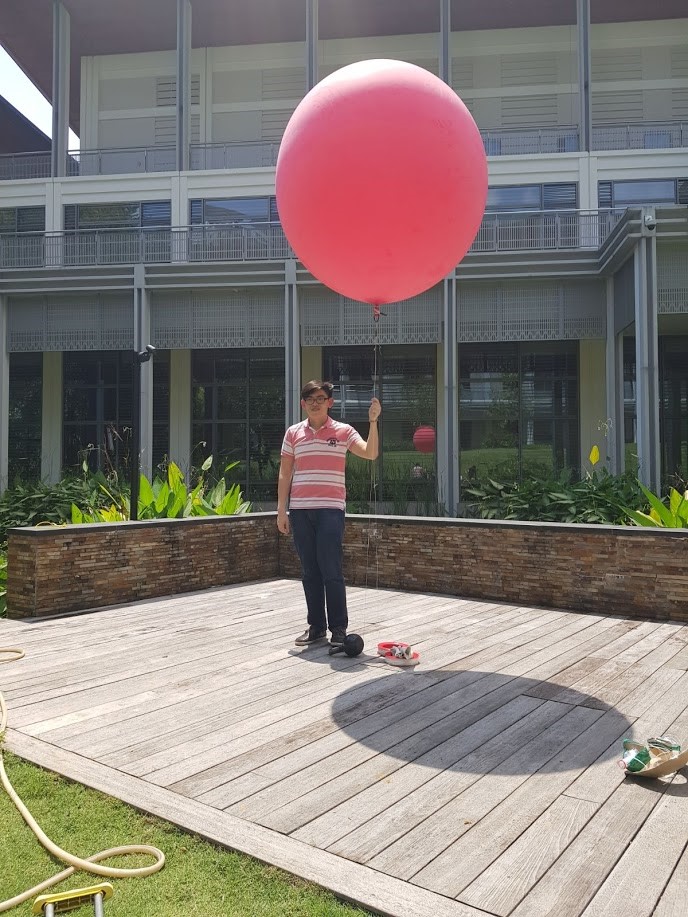 Xing Hao prepares to make an aerial map of the College using phones and a giant red balloon for his Week 7 project, Drones, Biodrones and Information. Image provided by Wang Xing Hao.

Like Shernice, Wu Hsioh Kwang Family Study Award recipient Wang Xing Hao (Class of 2021) has also benefitted from the philanthropy of the Wu family and has begun to pay it forward by giving back to his community. “As someone whose family background is not well-off, I really appreciate how the Wu Hsioh Kwang Study Award has relieved some of the financial burden off my family,” he said. “Having been the beneficiary of a number of scholarships and study awards throughout my life, I hope that I will be able to establish one in the future.”

Having recently completed his first year at Yale-NUS, Xing Hao has developed a strong passion for philosophy and intends to pursue it as his major. He credits his interest to his Philosophy and Political Thought class, which is part of the College’s Common Curriculum. “The class spans a number of theories from all parts of the world, and has opened my horizons to other ways of thinking and living,” he said.

In his spare time, Xing Hao pursues extracurricular activities that complement his varied academic interests. He currently serves as the communications director of the Yale-NUS Society for Academic Research, which publishes an annual journal dedicated to undergraduate research produced by Yale-NUS students. In addition, he and some friends are also participating in The Future of Our Pasts, a festival organised by Yale-NUS College as part of the Singapore Bicentennial that seeks to promote interest in Singapore’s history as well as broaden people’s understandings of the past. The group is currently working to produce a short history documentary that explores transnational and changing conceptions of intimacies over time. “We are interested in exploring issues related to the topic of migration, such as one’s intimacy with the nation, and the families that one leaves behind or finds in the new nation,” he shared.

Mr Wu Hsioh Kwang is the founder and Executive Chairman of Straco Corporation Limited, a developer and operator of tourism-related businesses. Having graduated with a Bachelor of Commerce degree from the then-Nanyang University, he has received the Nanyang Alumni Achievement Award for his outstanding contributions as an entrepreneur. Mr Wu also serves on several boards, including the Singapore Chinese Chamber of Commerce and Industry as well as the advisory board for the Haas School of Business at University of California Berkeley.