*All photos were taken before the implementation of COVID-19 safe management measures.

As world issues become increasingly complex and contemporary problems demand more innovative and holistic solutions, interest in interdisciplinary learning is on the rise. This approach to learning is not new to students at Yale-NUS College, where plenty of opportunities abound for students to explore research projects outside of their declared majors.

Among those who are currently taking on such interdisciplinary research is prospective Global Affairs major, Adriel Yong (Class of 2023). Working alongside Assistant Professor of Social Sciences (Psychology) Jean Liu and in conjunction with the Land Transport Authority (LTA), his independent research study aims to understand the seat-giving psychology and craft evidence-based policies to promote inclusive transport.

By understanding how we might “nudge” people to give up their seats to those with physical disabilities, the study hopes to explore interventions which might encourage people to extend this behaviour to those with invisible disabilities, or disabilities that are not immediately apparent like heart disease or low blood pressure.

Despite being a newcomer to psychological research, Adriel believes that the comparative lens he brings from a Global Affairs standpoint provided unique insights to the study. In particular, he drew on this perspective when analysing literature from different countries such as America, England and Australia, and the various types of interventions their city authorities have implemented to promote inclusive transport. 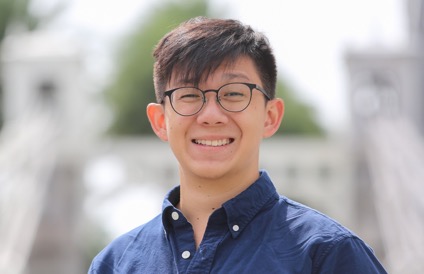 An aspiring public servant, Adriel’s interests lies in the field of behavioural insights and improving the design of public policy. “In the context of policymaking, having varied perspectives on the issue also helps to make the end-solution more robust, and hopefully achieve better policy outcomes,” he added.

The algorithm detects subtle differences in the coins as a result of the imprinting process and groups them into corresponding clusters, allowing the classification of coins imprinted from the same dies. The research study has particular significance in numismatics, advancing the identification of die groups used in the Roman period and challenging what had been assumed of Roman economic history. Whilst her main field of study is Physical Sciences and History, Minwoo embraced the challenge to work with machine learning algorithms, a previously unfamiliar field.  Now she is running and debugging on the code base, using images from auction houses as the primary datasets to train the algorithm.

While working on the project, Minwoo also came to recognise the importance of a diverse team and the synthesis of different academic backgrounds. “One of the things I really appreciate about this project is how creatively we interpreted and addressed our research question, and tapped on different skill sets and disciplines,” she said.

“More importantly, I think the emphasis is not necessarily on the interdisciplinary nature of research projects, but rather on the flexible and creative mindset it cultivates in a researcher, encouraging them to look beyond predetermined disciplinary boundaries,” she added.

Economics major Dragan Kantar (Class of 2022) is currently working with Assistant Professor of Science (Chemistry) Zhuang Bilin on new mathematical and computational methods to explore liquid water structures. They found that that liquid water is not a homogenous substance and could potentially comprise of two structures.

To figure out what those structures look like, Dragan is estimating relevant structural parameters by writing algorithms and running simulations on supercomputing clusters. He is confident that their finalised work will provide beneficial insights in other disciplines, such as biochemistry and climate science.

Reflecting on his research journey, Dragan said, “I got to learn and implement a lot of things that I used to only hear about in academic papers or technical discussions. The most exciting thing about interdisciplinary research is that I find many overlaps, both methodological and technical with the field of theoretical economics.”

“Furthermore, I was curious about the overlaps and differences between the methodology and approaches in the natural sciences and theoretical economics, as some of the aspects of our project seem to be explored in economics as well. It was also an opportunity to learn more from a discipline which I am not overly familiar with, and broaden my knowledge and outlook of the world,” he added.