The Future of Our Pasts Festival: a month of celebrating Singapore’s lesser-known histories 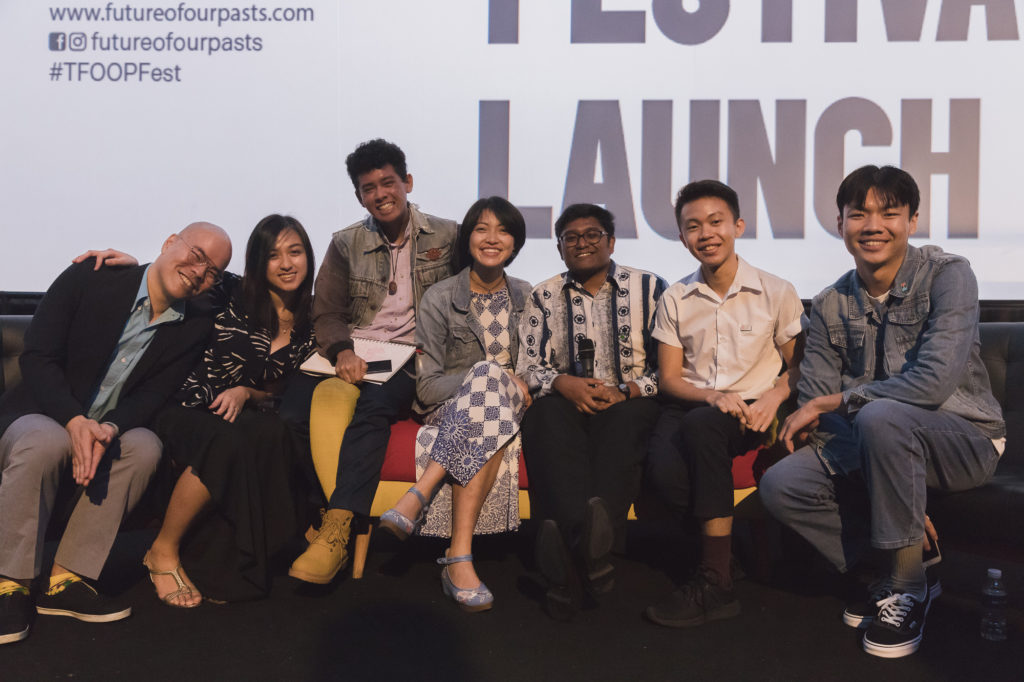 Panelists and moderators of the Project Creators’ Panel at the TFOOPFest launch. Image by Ashbel Chioh for TFOOPFest.

The Future of Our Pasts Festival (TFOOPFest), which took place from 16 February to 17 March, was a chance for young artists around Singapore to showcase their work in reimagining Singapore history. Organised by Yale-NUS College in support of the Singapore Bicentennial, the festival featured 11 projects by students and recent graduates from Singaporean and overseas tertiary institutions.

The festival was a great success, attracting a total of 4,800 attendees across 21 different events. These included distinguished guests like Mr Ong Ye Kung, Minister for Education; Mr Desmond Lee, Minister for Social and Family Development; and Mr Gene Tan, Executive Director of the Singapore Bicentennial Office.

“I was heartened to see all the projects we’ve been working with the teams to develop come together beautifully, and to receive such a warm reception. I hope the projects presented during TFOOPFest will be remembered by audiences for their fresh and creative take on less-known stories from our past,” said Ms Yap Zhiwen, Festival Manager of TFOOPFest.

The opening ceremony on 16 February at The Projector theatre was graced by Mr Ong Ye Kung, Minister for Education. Speaking to the media at the launch, Mr Ong commented, “Through the festival, the young creators are making history more relatable and accessible. This is an important endeavour as we try to connect with our past, gain a better understanding of our history, and better understand the soul of our nation and people.” 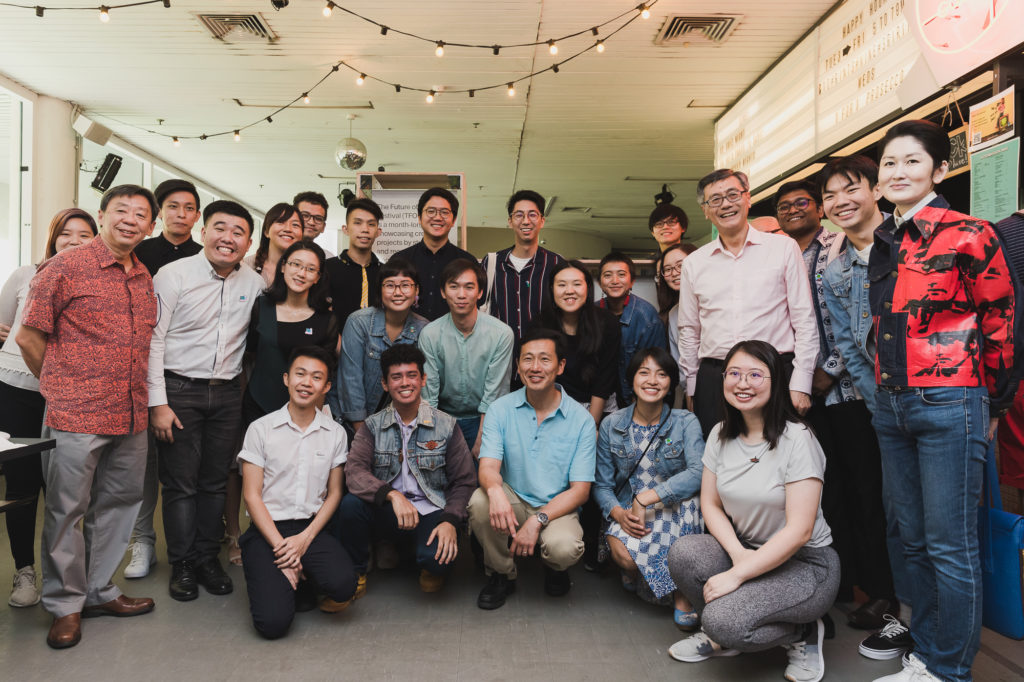 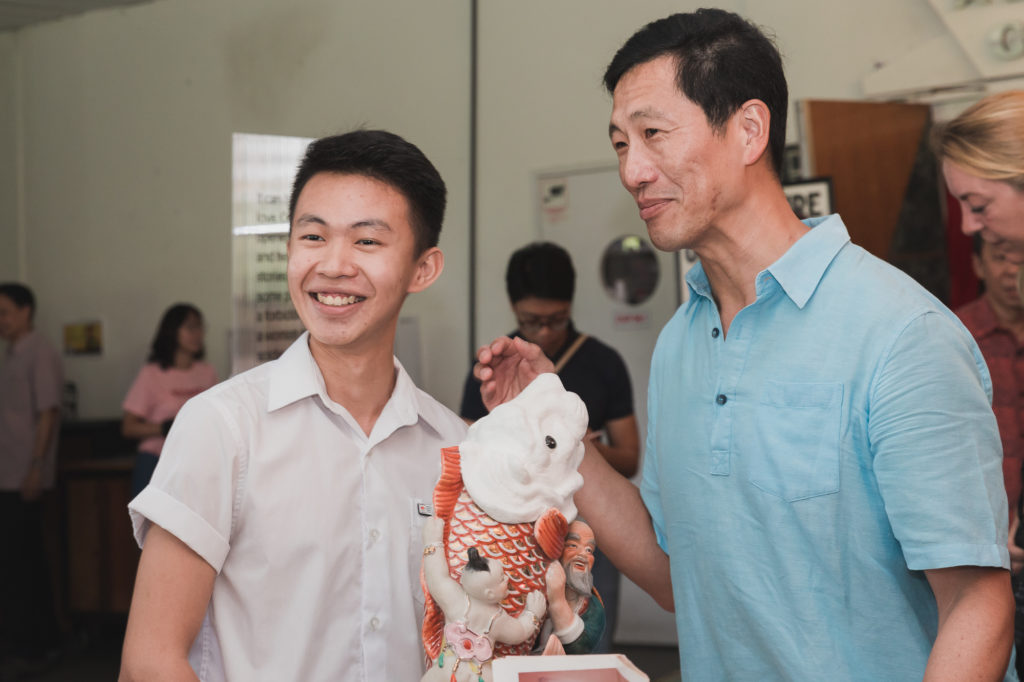 Minister Ong (right) with Sean Cham (Class of 2019), project creator of First Storeys, a theatrical installation on housing development in Singapore in the 1950s to 1990s. Image by Ashbel Chioh for TFOOPFest.

TFOOPFest’s projects span different categories, from documentaries to exhibitions and even a guided walking tour.

First Storeys by Sean Cham (Class of 2019) was a theatrical installation on housing in Singapore. Taking place in the former Bukit Ho Swee Community Centre, it explored the traditional “kampung to metropolis” narrative, focusing on the period of large scale resettlement in Singapore from the 1950s to the 1990s.

Audiences were invited to participate in a “resettlement exercise” by the fictitious Singapore Housing Improvement Trust. During the proceedings, the story of two ladies (one Chinese, one Malay) who were forced to live together as part of the resettlement exercise unfolded. 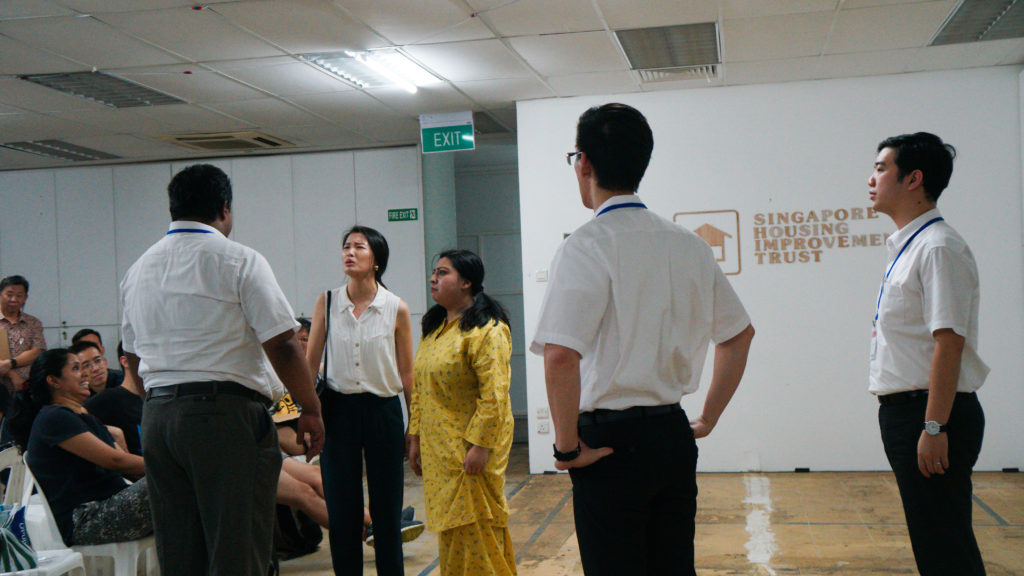 Image by Charmaine Chua for TFOOPFest.

First Storeys received an immensely popular reception, with all 10 shows sold out and a total of approximately 720 attendees.

“It was exciting to see everything come to life, because the audience plays a huge part in enlivening the entire experience of First Storeys. I hope that our audience walked away not only knowing more about what happened in the past, but also what is presently happening,” said Sean. 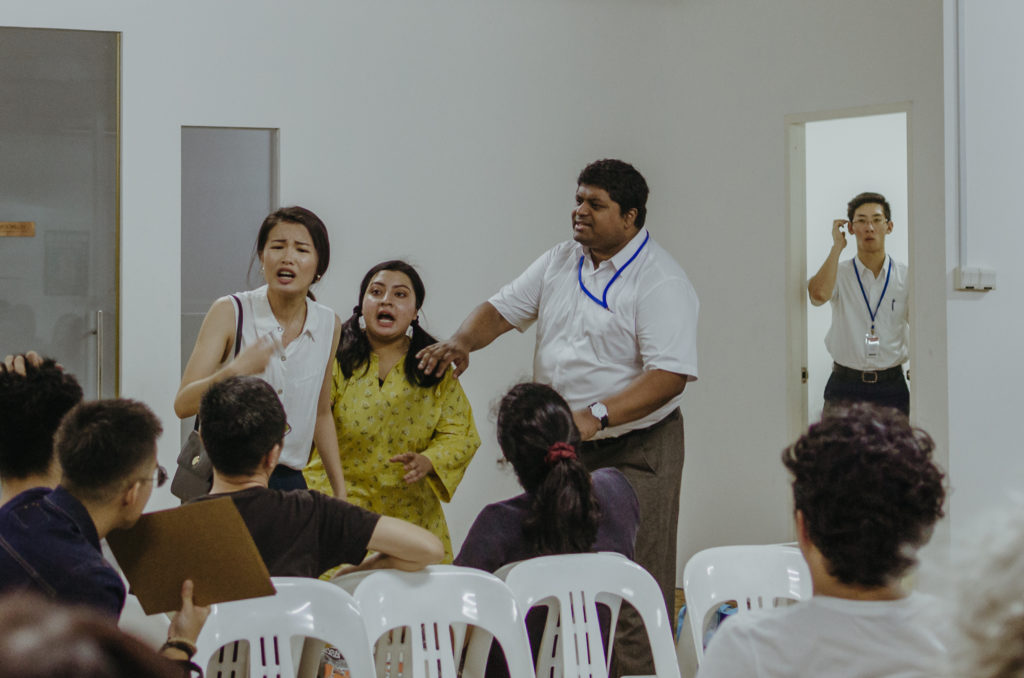 Image by Yap Yen for TFOOPFest.

Sarong Party, a musical performance by The MadHatter Project (a local band), reflected on how post-independence Singapore has contended with its colonial legacy. The flamboyant performance, which weaved poetry, choral singing and Thai disco together with original compositions, was well-received by festival participants, including Mr Desmond Lee, Minister for Social and Family Development and Mr Gene Tan, Executive Director of the Singapore Bicentennial Office. 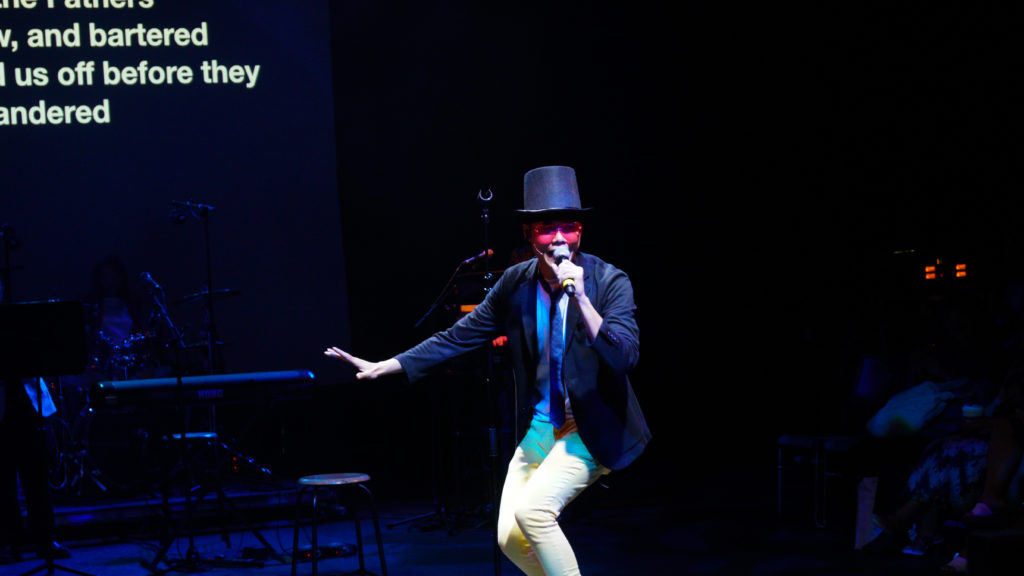 Images by Charmaine Chua for TFOOPFest.

Rojak Romance by Yale-NUS alumni Mr Tinesh Indrarajah (Class of 2017) and Ms Jane Zhang (Class of 2018) explored the history and culture of the Ceylonese Tamil community in Singapore and Malaysia through the lens of a mixed-race romance between Mr Indrarajah, a Malaysian Ceylonese Tamil, and Ms Zhang, a Chinese American.

“To share something that’s so personal and to have it resonate with others is really heartwarming and validating. We hope that our documentary has prompted people to think critically about what culture means to them, and better understand the nuances of what carrying forth culture means and looks like in this increasingly globalised world,” said the duo. 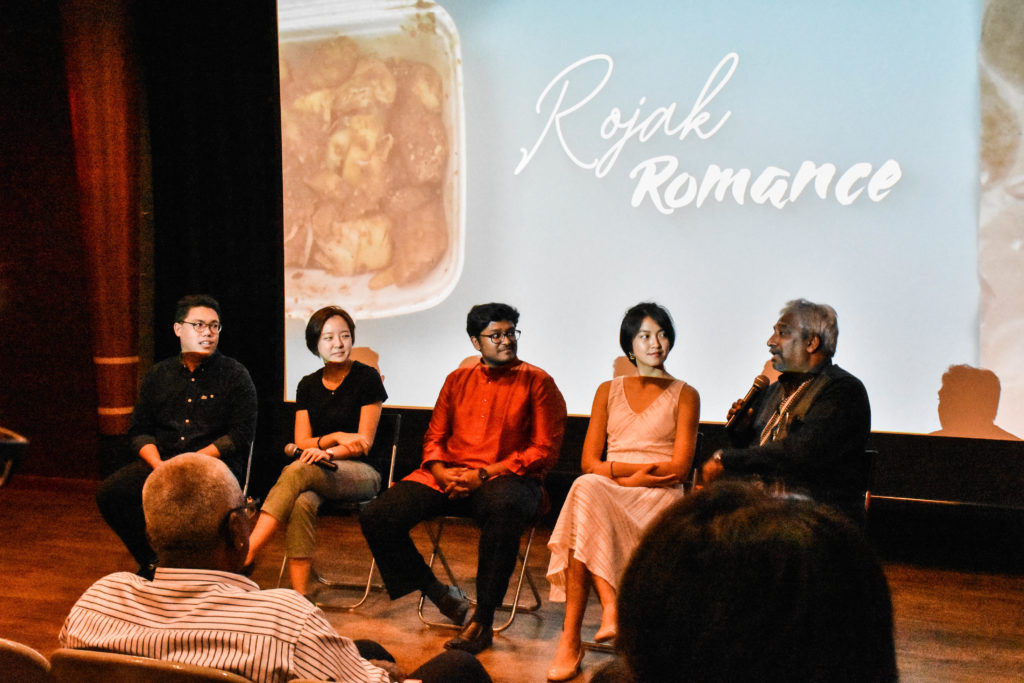 The ORchard: A Stroll Between Valleys installation, sited in front of Ngee Ann City, aimed to highlight Orchard’s physicality. Underground pipes that keep Orchard safe from floods were recreated above ground for visitors to interact with. The installation was accompanied by four sold-out walking tours, which took participants down the popular shopping belt to uncover the layers of history beneath it. 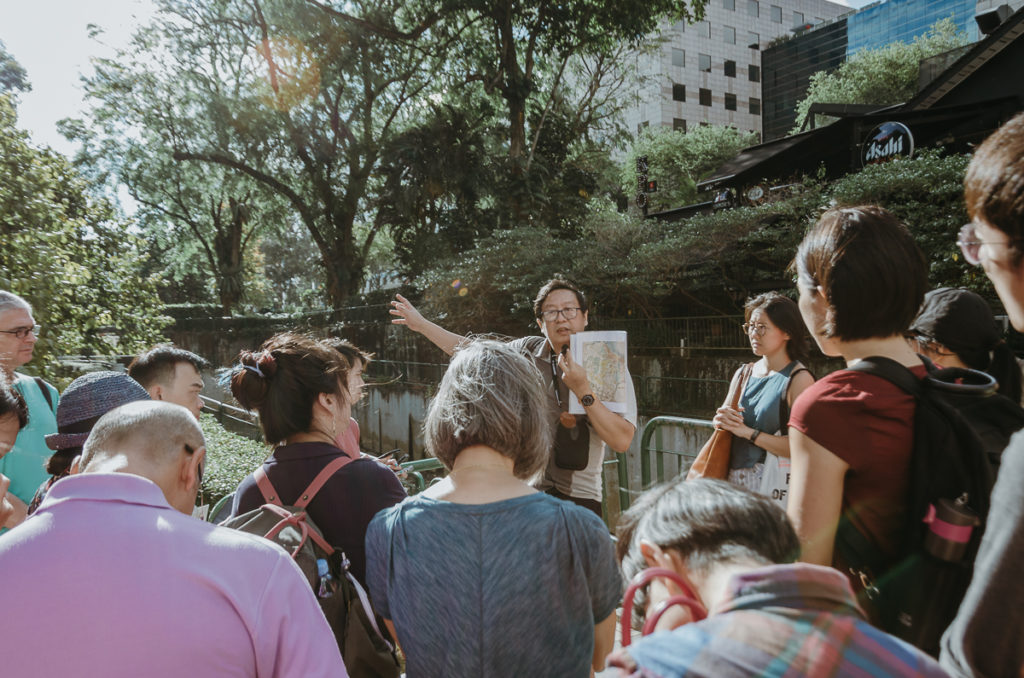 Image by Yap Yen for TFOOPFest.

Factory (Super)Women by Pang Wei Han (Class of 2019) was a documentary and exhibition showcasing women who worked in factories during Singapore’s period of rapid industrialisation – including Wei Han’s mother and grandmother. The team behind the project also organised a dinner, (Super)Women Assemble, to celebrate the achievements of these women and to bring them, their families, and the public together in a shared event.

“So many of the visitors who came and witnessed the women’s experiences left very powerful and inspiring reflections, as they thought deeply about their own families and what their parents have given and sacrificed for them. I hope that through our project, youths today can come to acknowledge, and appreciate the experiences of these women,” said Wei Han. 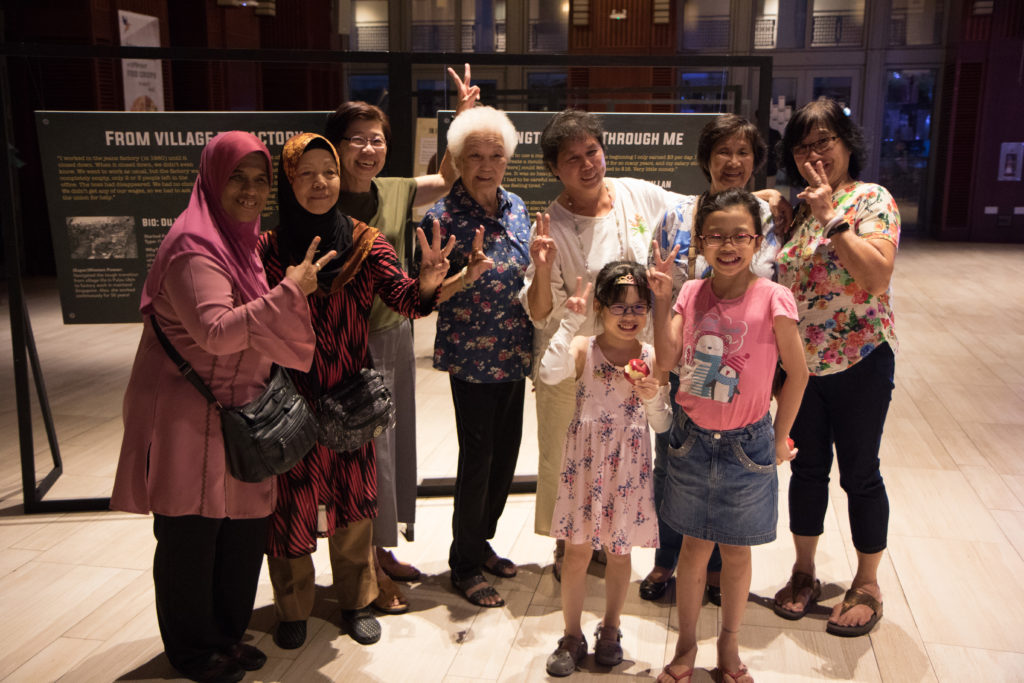 The (Super)Women Assemble dinner was held in one of Yale-NUS College’s dining halls. Image provided by Stefan Liew for TFOOPFest. 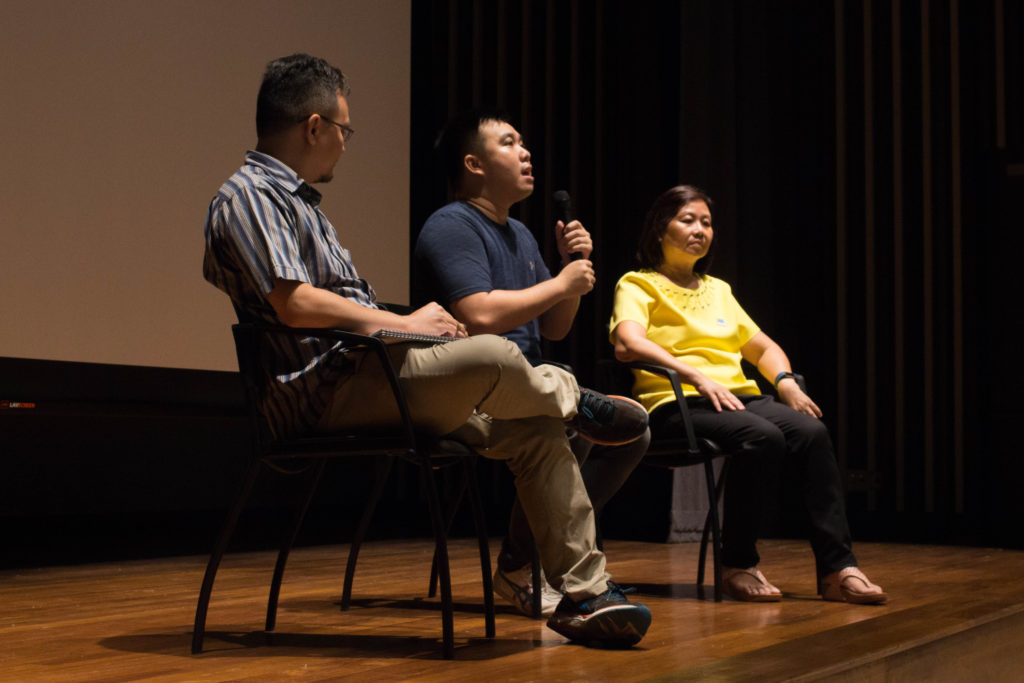 Last but not least is Intimacies, an exhibition centred around remittance letters sent home by Chinese migrant workers in the 20th century. It explored the historical context and affective value of these letters, and showcased the team’s artistic responses to them.

Wee Jing Long (Class of 2019), one of the seven team members behind the exhibition (all of whom were from different universities), said, “History is not just about notable figures and events, nor, as our exhibition may initially suggest, about extending attention to marginal figures in the historical record. History is more crucially the stuff of intimacies – the things we choose to remember and hold close to ourselves, and the things we trade away and keep at a distance.” Image by Yap Zhiwen for TFOOPFest.

Overall, the festival was well-received by the public, seeing substantial engagement across the various projects.

Professor Tan Tai Yong, President of Yale-NUS College and Chair of the TFOOPFest Steering Committee, noted, “The Festival has been a fitting finale for almost two years of work. What started as ideas found fruition in creative and imaginative projects that were expertly executed. TFOOPFest has been a success and I want to commend everyone for their wonderful work, especially the festival managers Yap Zhiwen and Tan Li-Jen for their capable stewardship of this project from conception to completion.”