19 October 2016: Yale-NUS freshmen explore new ideas through journeys across Singapore and the world

Scene at Keppel Shipyard by Yasunari Watanabe. This photo won first prize in a photo showcase supported by the Singapore Maritime Foundation (SMF), as part of the Week 7 project “Singapore’s Shipping and Maritime Experience”

Earlier this month, Yale-NUS freshmen were dispersed across Singapore and the world for the College’s flagship Week 7 experience.

Facilitated by the Centre for International & Professional Experience (CIPE), the Week 7 Learning Across Boundaries (LAB) is a faculty-generated initiative. This one-week trip, which takes place in the middle of the first semester, seeks to encourage faculty collaboration across disciplines and introduces first-year students to the research specialties of Yale-NUS faculty.

For Anthea Chua who has always been interested in the lesser-known narratives of Singapore, the visits to different places in Singapore were particularly useful as they offered an opportunity to engage with the concepts of memory, identity and narratives both on an individual level as well as on a collective, or national level.

“The most memorable experience for me was walking around Bukit Brown Cemetery with dedicated volunteers who conducted weekly tours on a wide variety of topics such as the flora and fauna of the cemetery, the architectural features of the tombs, and the pioneers buried in the cemetery,” she shared. “Though I had been there before, I was struck by the passion with which they delivered what could have been formulaic paragraphs on the history of Bukit Brown, as well as the wealth of knowledge that they so willingly shared with us.” Some students began their Week 7 experience with a flight out of Singapore. One of them is Rahul Naidu who was in Cape Town, South Africa, for his project titled “Apartheid in South Africa: Understanding the Psychological and Political Mechanisms of Prejudice and Discrimination”. The project was jointly conceived by Assistant Professor Paul A. O’Keefe and Assistant Professor Chin-Hao Huang from the Social Sciences Division.

“The main aim of our Week 7 was to study the psychological underpinnings of prejudice and discrimination, and the political institutions that legitimise and preserve them,” Rahul shared. To get an in-depth understanding of these issues, students travelled to South Africa to learn more about the history and impact of Apartheid. 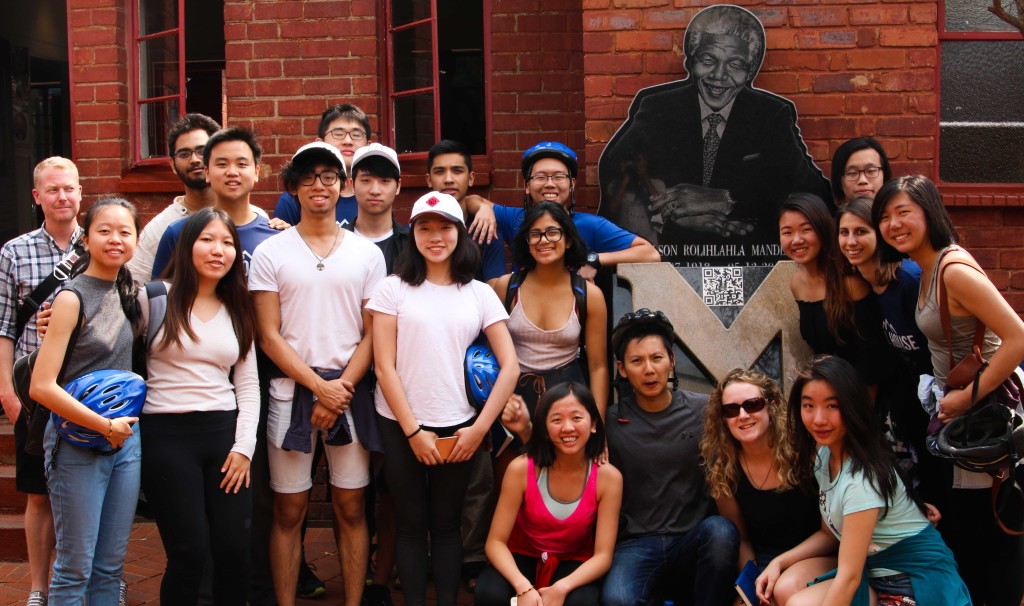 The trip spanned both Cape Town and Johannesburg, two major sites of the Apartheid. “We studied the Apartheid by visiting various historic sites, townships and museums in Johannesburg and Cape Town. This included Robben Island, where Nelson Mandela spent 18 of his 27 years in prison, as well as the various sites around Soweto including the homes of Nelson Mandela and Desmond Tutu and the Hector Pieterson,” said Rahul.

During the trip, students were introduced to the intersections between psychology and political science. For Rahul, this was most poignant in examining how the apartheid regime was borne out of colonialism.

“One of the psychological themes we learnt was the self-fulfilling prophecy. This means that when an individual is subjected to prejudice, they’ll unconsciously mould themselves to fit that same prejudicial conception, thus confirming the belief. We clearly saw how when the colonial powers invaded these lands, the way they perceived the natives to be inferior and constricted the natives’ potential, and that perpetuated through the centuries. The way this concept manifested itself through the laws of the apartheid regime was very tangible.”

Leon Han spent his Week 7 in the Himalayas with Senior Lecturer in Philosophy Simon Duffy and Dr Zohar Lederman from the Yong Loo Lin School of Medicine at the National University of Singapore.

“We spent about four days up in the Himalayan mountains and three in a more urban region, the city of Rishikesh, the yoga capital of the world. We were there to study the concept of OneHealth, the notion that animals, humans and the environment are all interconnected and that affecting one would result in a change in the other two.”

One of the central philosophical concepts of the trip was anthropocentrism, which treats human beings as the central or most significant entities in the world. For Leon, he was struck by the realisation of how pervasive this idea is in our everyday life.

“Most people don’t realise how anthropocentrism permeates every aspect of their decision-making until it’s pointed out to them. For instance, we tend to feel entitled when it comes to resource usage and even though we know that we need to protect and conserve it, ultimately we’re still doing it for our own ends,” he shared.

Week 7 culminated in a symposium held on 1 October on campus. Each project team presented their key takeaways through creative methods to share their Week 7 experiences with their peers and family.

For instance, Leon’s team set up an exhibition showing specific examples of the four different types of philosophical stand points that they learned about on the trip – narrow and broad anthropocentrism, biocentrism and ecocentrism, while Anthea’s team decided to prepare a satirical infomercial that markets a product that would help people forget their problems.

For Rahul, his Week 7 LAB was an incredibly meaningful experience and he is contemplating the idea of starting a club with his friends to conduct more in-depth analysis of inequality and the apartheid. “We hope to extrapolate our findings to other situations to better understand the underpinnings of various situations in the global political arena. I am pretty sure that I’ll be going to South Africa very soon to study inequality and power structures further.”