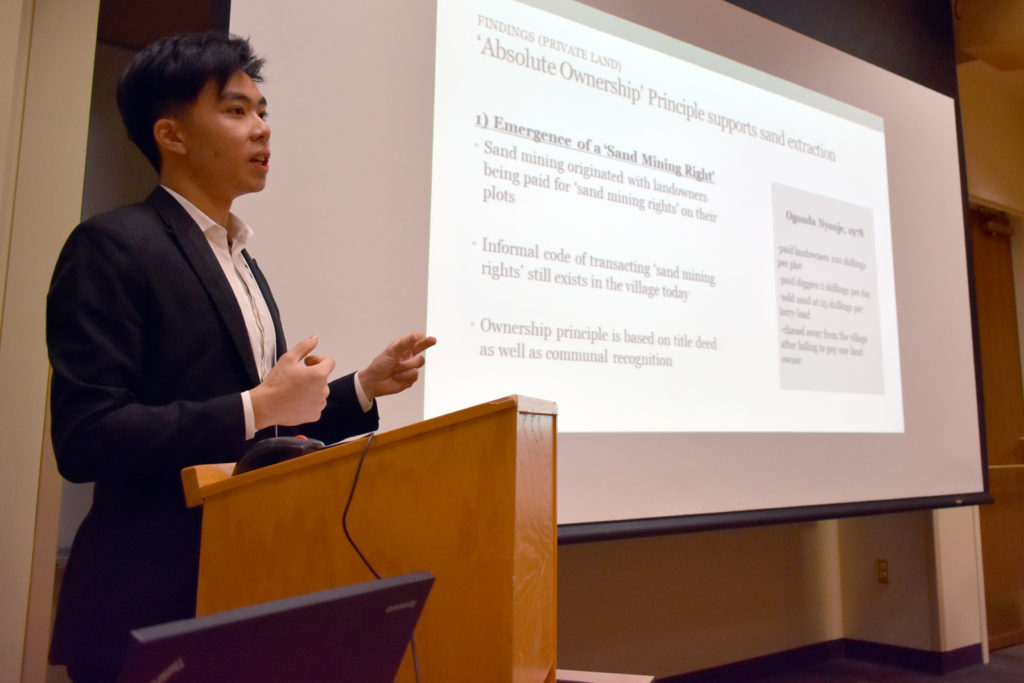 An Urban Studies major, Ernest was awarded the prize for his capstone research project titled ‘Living Off the Land: Sand Mining, Property Rights, and the Preferential Option for the Poor in Kenya.’ He also presented his research at the HDC.

Ernest had developed an interest in the issue of sand mining while he was on semester abroad in Kenya.

“I had no idea what sand mining was before going on study abroad in early 2018. During my study abroad programme with the School for International Training (SIT) in Kenya, we visited a village where sand mining was a main source of livelihood, and it was there that I realised that sand mining is a complex urbanisation and poverty-related issue that has been relatively under-researched,” he said.

His project focused on the causes of sand mining in a peri-urban village (a hybrid landscape comprising both urban and rural elements) in Kisumu, Kenya, where villagers have been mining sand since 1978. He conducted semi-structured interviews with different members of the community, including villagers, government officials and community leaders, in which he had a set of predetermined questions but would also allow the conversation to flow organically.

“A lot of my fieldwork involved sitting in people’s homes listening to their stories, or time spent in government office buildings,” Ernest said. In addition, he went on walks with community partners, geotagged locations, and analysed historical maps and records. He attributes his ability to conduct multi-method research to the interdisciplinary focus of the Urban Studies programme at Yale-NUS College.

“The Urban Studies programme has trained me to be able to understand a place using a variety of methods. Being able to piece different types of information together was very helpful in the context of my chosen field site, where data was often patchy or unreliable,” he said.

“He has been very helpful every step of the way, providing me with support even when I was in the field. He also pushed me to engage critically with the theoretical literature in order to enhance the academic value of my research,” Ernest said.

Asst Prof Smith had also helped Ernest to prepare for the conference by inviting him to present his work at the Pacific Rim Community Design Network workshop in December 2018. “This gave me the opportunity to refine my work in a ‘mini-conference’ setting,” Ernest said.

Reflecting on the conference experience, he found the proceedings enriching and was thankful to have met other researchers who were working on related fields.

“During the conference, I got to present on a panel alongside another student who had done research on perceptions regarding the mining industry in Ghana. This afforded the opportunity for us to have an insightful conversation on resource extraction and sustainable livelihoods,” he said.

After graduation, Ernest will join Ascendas-Singbridge Group, a company providing sustainable urban solutions. “I am excited to begin work and intend to pursue a career creating truly sustainable urban development that benefits local communities,” he said.