While other students were busy preparing for their finals in mid-April, Anisha Charan (Class of 2018) was working on transcribing over 5,000 names onto rice paper as an installation for 清 Qīng, while Annette Wu (Class of 2017) rehearsed scenes after classes with her fellow actor, Gabriel Lim (Class of 2019). These students were preparing for the second staging of 清 Qīng, which sought to reimagine stories from the Sook Ching massacre during the Japanese Occupation of Singapore.

The first installation of 清 Qīng held in November 2015 showcased the research that the team had amassed, and focused primarily on their experiences grappling with collective amnesia.

“There’s so much history in Singapore that we don’t really talk about, because Singapore is such a fast-moving place. The landscape changes really quickly,” elaborated David Chia (Class of 2017), the founder of Artslab. “The 清 Qīng project was meant to reconcile all of that from our generation’s perspectives on the Sook Ching massacre.”

For Annette, who hails from Taiwan, it was the opportunity to reimagine Singapore’s history as an international student through a more nuanced lens that excited her.

“There was so much about Singapore I had never even thought about,” she said. “I took the opportunity to use my imagination to think about the different experiences of women whose stories were not recorded or remembered in the mainstream media.”

Based on interviews with survivors of the Japanese Occupation from the National Archives’ Oral History Project, the team’s writers attempted to bridge research curation, writing and theatre. Annette shared that it was the marriage between myth and reality and the grey areas in between that truly set 清 Qīng apart.

“It was the process of conceptualising these vignettes and writing them, that greatly inspired and led to the works that were presented,” she shared. 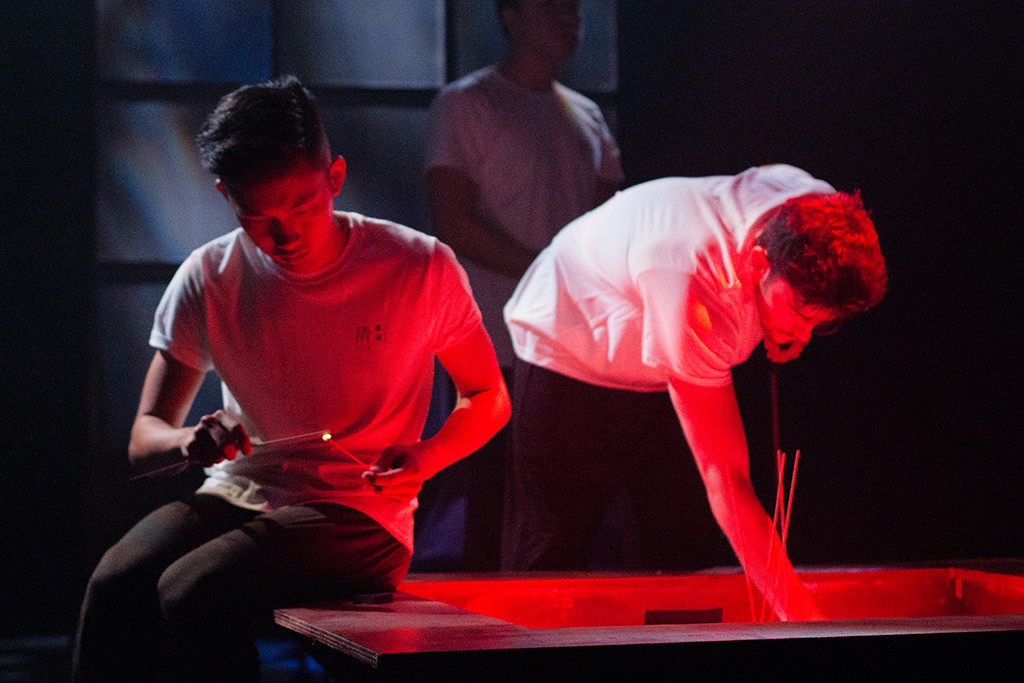 One of the audience members, Cheryl Cosslett (Class of 2018) found the performance deeply intriguing.

“清 Qīng is one of those works of art that required me to constantly think and ask myself what everything meant and referenced to — I didn’t understand everything even until the end, but I think that was the point,” Cheryl shared. “Language barriers, medium barriers, these things shape history in ways that prevent us from immediately bridging the emotional gap we have with the lived experiences of victims.”

The performance was also an enriching experience for the students involved in the production.

“The experience working with the school’s carpenters in developing the set exposed me to the intricacies of creating functional, practical work—for a purpose,” Anisha noted.

Similarly, Annette enjoyed the entire process of research, writing and performing with her teammates.

“My greatest takeaway is understanding the importance of trust in a collaboration, and being open to learning and growing from it, intellectually, artistically and emotionally,” she reflected.

清 Qīng was conceptualised by Artslab, a student organisation dedicated to creating experimental, interdisciplinary and intercultural work. According to David, Artslab focuses on theatre pieces that reflect the social environment.

“Artslab tries to use the arts as a medium for talking about current issues, social and political environments, and to bring about cultural diplomacy,” David explained.

“I was inspired to set up Artslab when I was studying abroad in London for a semester, particularly because there’s so much theatre there that’s very sensitive to its social environment and its context.”