After an exciting two-week Orientation programme, which included the Amazing Race and RCX trips to regional countries to build the sense of community, the Class of 2019 was officially welcomed to Yale-NUS College at the annual First Year Assembly on 6 August 2015.

The significant event, which marked the very first official College event to take place at the new Yale-NUS campus, was attended by members of the Yale-NUS senior leadership, faculty, staff, student government representatives and family members of the incoming class. The College’s brand new Multi Purpose Hall was decked out in the College colours and banners to welcome about 600 guests who graced the event. 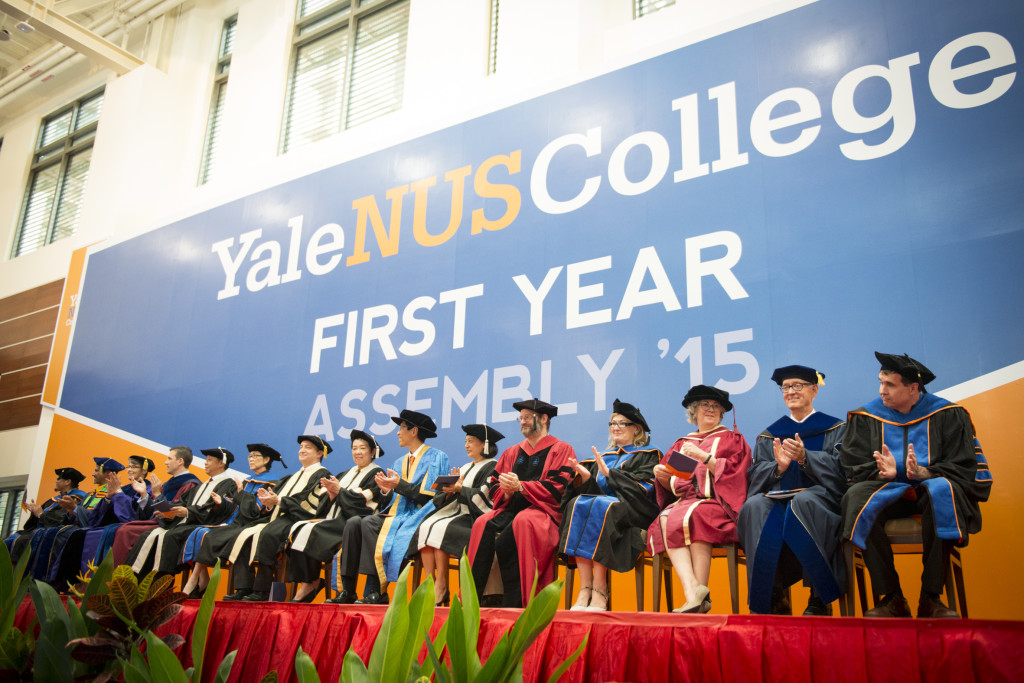 Executive Vice-President of Academic Affairs Professor Tan Tai Yong gave the opening address, noting that the incoming class is one of incredible talents and achievements and included top students, elite sportsmen and women, published poets and novelists, accomplished musicians and artists, and dedicated and influential community leaders. He urged the new students to align their greatest gifts with society’s greatest needs, calling on them to make the most of opportunities to serve the community, whether as volunteers, interns or student groups. Professor Tan added that Yale-NUS students are part of a learning community where each of them has the opportunity to shape the kind of legacy and future they want.

“I urge you to take personal responsibility for your learning experience here. Take initiatives, ask questions, push boundaries – but do so honestly, responsibly and respectfully – build friendships, establish networks and make a difference,” he shared.

President Lewis also welcomed the new class, highlighting how the college will be a community and place where young people like themselves will be trained and prepared for society, and where character will develop.

“The values we designate by ‘character’ are clearly not the monopoly of any class, race, or sex—and yet different cultures, and different people within any given culture, may view them differently. I invite you therefore not just to develop the habits that Aristotle, or Confucius, or current-day educational theorists, may think are most important, but to question your own assumptions and prejudices and to decide what sort of character you want to develop. We can then all work together, as part of a supportive community, to try to help each other learn the habits of character that we agree to admire.”

On behalf of the Yale-NUS students, sophomore Yonatan Gazit welcomed the Class of 2019 to the family with some heartfelt reflections of his own initial year in college. Sharing his own experiences, Yonatan spoke fondly of the opportunities that each new student will have to shape the young college into what it will be in future.

“I think it is a beautiful thing to matriculate to a school still in its infancy, and to leave it standing on firmer footing,” Yonatan shared.

His warm welcome of the Class of 2019 was followed by what has now become a highly anticipated tradition – the balloon drop, with cheers echoing off the walls of the Multi Purpose Hall. 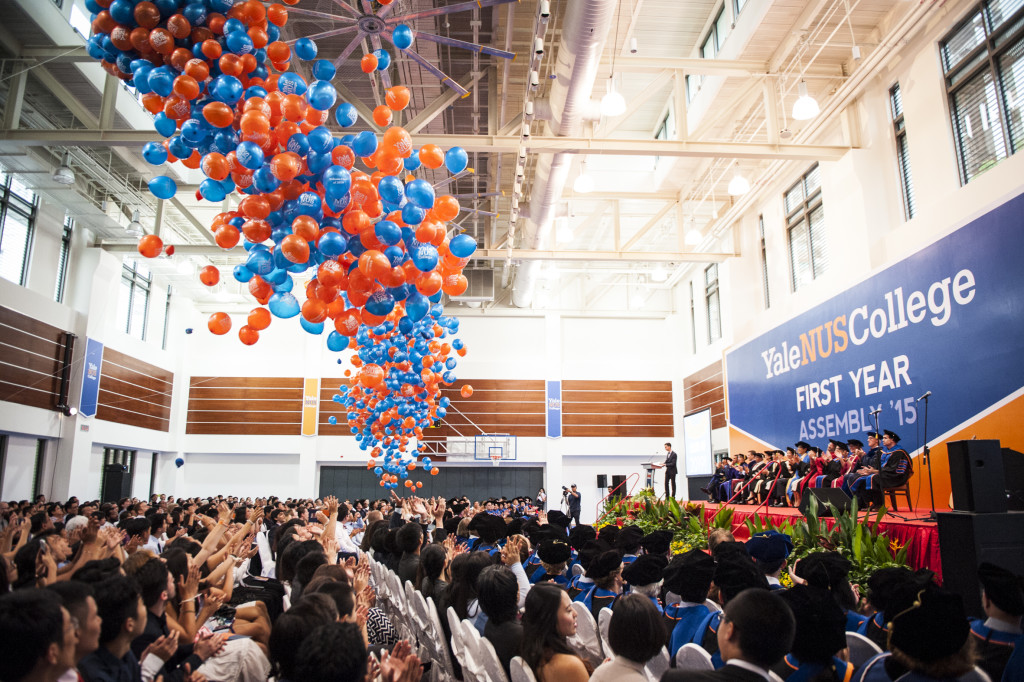 The balloon drop, welcoming the Class of 2019.

The First Year Assembly was followed by welcome dinners at the individual Residential Colleges. Later that evening, the new students gathered in the Saga courtyard, for a housewarming event planned by the Dean of Students’ Office and the Orientation Committee. The Housewarming Ceremony was a symbolic event where the Class of 2019 was welcomed to Yale-NUS and their residential colleges through the passing of candle flames.

Risa Shindo, who hails from Japan and is one of the 190 incoming students, shared her thoughts on the First Year Assembly and Housewarming Ceremony.

“It was a nice little ceremony that really showed us our unity, and that we have just joined a super exciting and caring community of Yale-NUS that we can now call home. ”