On 6 February, Yale-NUS College hosted Professor José Ignacio Torreblanca, who delivered a lecture on populism in Spain, in an event co-sponsored by the Spanish Embassy in Singapore, the Yale-NUS Humanities and Social Sciences Divisions, the Yale-NUS Philosophy, Politics and Economics (PPE) and Global Affairs majors, and the Yale-NUS Spanish Programme. Professor Torreblanca is a Professor of Political Science at the National Distance Education University (UNED) in Spain and the Head of the Madrid Office of the European Council of Foreign Relations. From 2016 to 2018, he also served as the Op-Ed Editor of the Spanish daily, El Pais.

Held at the Yale-NUS College Performance Hall, the lecture was titled ‘Populism in Europe: Is Spain Different?’ and attended by Yale-NUS students and faculty, and members of the general public. It aimed to explain the recent rise of right-wing populism across the European Union and clarify why Spain was an exception.

Prof Torreblanca attributed the rise of populist politics in Europe to three key events: foreign interference in democracies, the 2008 financial crisis, and the Syrian refugee crisis in 2015. According to him, the evolution of technology has made it easier for foreign powers to interfere in, and influence, democratic elections. To demonstrate this, he turned to the example of Russian interference in the 2016 American elections and Russian contribution to the spread of anti-immigrant fake news in France and Germany. 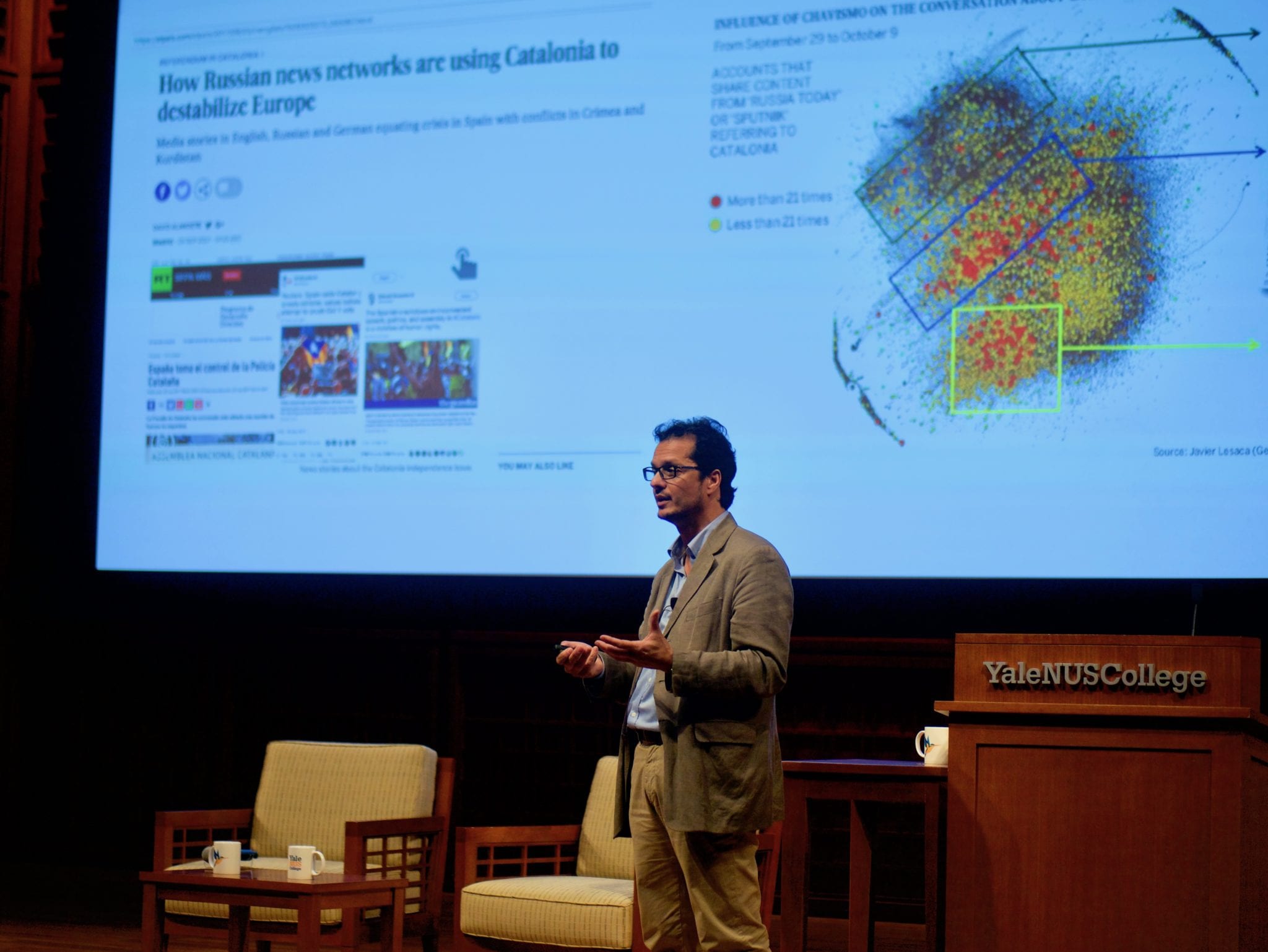 According to Prof Torreblanca, the 2008 financial crisis perpetuated a sense of vulnerability and economic fear across the European Union – where many economies were hit hard by the recession. This economic insecurity coincided with the Syrian refugee crisis in 2015 and resulted in the spread of Islamophobia, which gave right-wing populist politicians an opportunity to expand their voter base by playing on people’s economic and security fears.

Rising populism, he observed, was not restricted to Europe, but is an international trend. He added, “If you look at the 2018 Freedom in the World Index, it was the 13th consecutive year of decline in global freedom. It’s a global phenomenon. A global crisis of democracy.”

However, Spain appeared to be a curious exception to this rise of right-wing nationalism. Drawing on his years of study of the Spanish political system, Prof Torreblanca argued that this is a result of Spain’s unique responses to the abovementioned crises.

Unlike the United Kingdom, which had its reservations about joining the European Union, Spain eagerly joined the Union. As a result, the Spanish public viewed its institutions more optimistically and retained a degree of trust in it, despite the 2008 crisis. Moreover, Spain viewed immigrants as a way to grow the economy, so there was a place for migrants, especially men, in the service industry. This helped stem the tide of anti-migrant hysteria that had overtaken the rest of Europe. Thirdly, he added, Spain already had an established community of Muslim migrants living in the country for nearly two decades prior to Syrian refugee crisis. This helped dispel Islamophobic stereotyping.

Prof Torreblanca concluded that these three factors prevented Spain’s right-wing populist party Vox from successfully manipulating the events that had reconfigured the rest of the European political scene. He ended his lecture on a hopeful note, saying, “Spain is a resilient democracy. Its reaction to indoctrination was cosmopolitanism.”

The lecture was followed by an engaging Question & Answer session mediated by Mr Sudhir Thomas Vadaketh, a Singaporean author who wrote Floating on a Malayan Breeze: Travels in Malaysia and Singapore. Michael Sagna (Class of 2023) attended the lecture to learn more about Spanish politics to supplement his Intermediate Spanish module. He said, “What intrigued me the most was Professor Torreblanca’s explanation of the conditions under which immigration doesn’t result in xenophobia and right-wing populism. Moreover, this really helped me understand Spain’s position in European politics.”

Joshua Tee (Class of 2022) was interested in identity politics and noted, “The sudden explosion of populist sentiments in politics is a phenomenon I’m greatly interested in, and this talk is all the more timely, given the UK’s recent withdrawal from the EU.”

On 7 February, Prof Torreblanca returned to Yale-NUS to lead a journalism workshop titled ‘How to Write a Successful Op-Ed?’, part of the Centre for International & Professional Experience (CIPE)’s ‘Pathways in Journalism’ initiative. Prof Torreblanca explained to the 15 student participants the ins and outs of a career in journalism, how op-ed writing evolves as contexts change, the time constraints faced by print newspapers, and how journalists must navigate the demands of truth and democracy.

A participant of the workshop, Karthik Calling Karthingan (Class of 2022) said, “Professor Torreblanca was very engaging. He really helped me understand the pressures and demands that come with being a journalist.”