In the selection of a government and the leaders of a nation, is democracy or meritocracy more important? Can they co-exist and how best should this be done?

These were the questions that Professor Daniel Bell, Chair Professor of the Schwarzman Scholars programme at Tsinghua University in Beijing and Director of the Berggruen Philosophy and Culture Center, and Professor Philip Pettit, L.S. Rockefeller University Professor of Politics and Human Values at Princeton and Distinguished Professor of Philosophy at the Australian National University were invited to Yale-NUS College to address and publicly debate about. The discussion took place as part of the President’s Speaker Series, which aims to bring thought leaders to the College to share their views with the College community and the community beyond.

Highly recognised in their fields, the two distinguished professors presented their differing opinions on democracy and meritocracy, by comparing the model of leadership selection in China to the Western world.

Professor Bell spoke first, highlighting the key ideas in his recently published book, The China Model: Political Meritocracy and the Limits of Democracy.

He explained that he had penned his initial thoughts about the Chinese political model and made a case for it in publications such as the Financial Times and New York Times, but the opinion pieces were not well-received.

Professor Bell shared: “I was massacred by my (academic) friends, saying, ‘Why has he become an apologist for the Chinese communist party?’”

This led him to devoting his time to writing a book instead, where he argues that the China model of choosing leaders, which he labels as the “vertical democratic meritocracy” is one that is worth promoting. He contends that a reconciliation of democracy and meritocracy has shaped China’s political reform for the last three decades, and led to the model where leaders are selected and promoted based on their merits. He explains a political meritocracy is interested in selecting and promoting leaders with superior qualities in terms of intelligence, social skills and virtue. Questioning the legitimacy of democracy in being the best method for selection of political leaders, he argues that the ‘one person, one vote’ model is flawed, and that the Chinese model is one that should be more widely promoted. 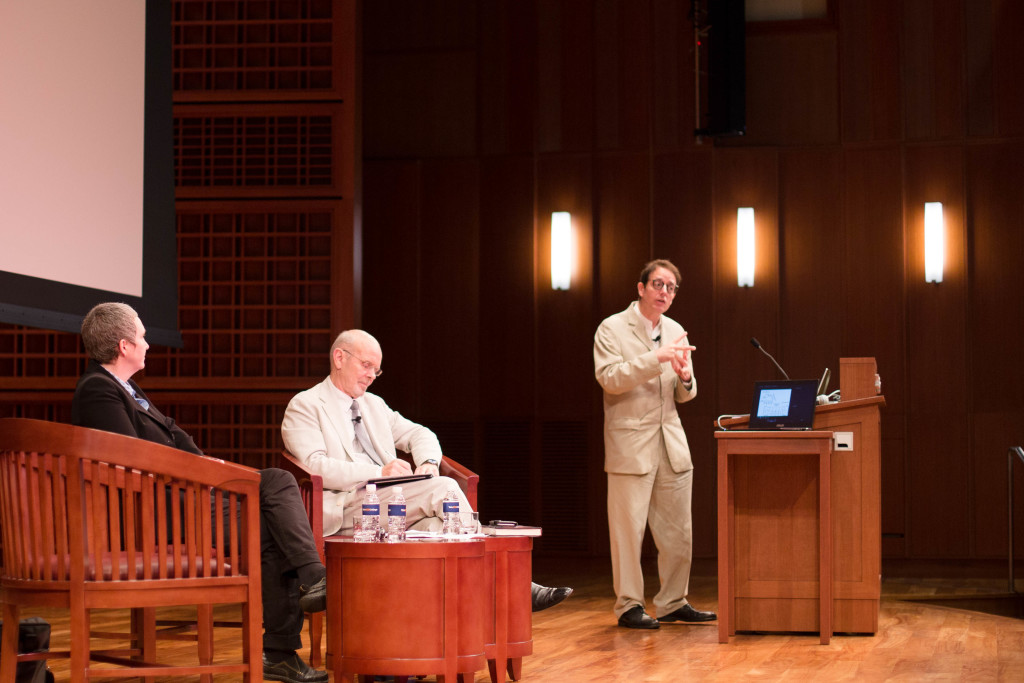 “Democracy is not just about election, but about control,” Professor Pettit countered, defining democracy as a multi-dimensional system where people have fully shared control in some way and should not be simply defined as electoral democracy. Using a graphic which compares the Chinese and Western models, he described the China model as a single triangle, which is split into three layers, with village democracy at the base, followed by middle government, and finally with leadership at the top. In this model, democracy happens only at the village level, and entry to the middle government as well as movement from the middle government to leadership is based on meritocracy. On the other hand, the western model is more sophisticated, with meritocracy working alongside democracy as those voted into leadership are kept in check by non-elected bodies.

The two speakers provided deep insights to the idea of democracy and meritocracy, and how it manifests in a political system. Their presentations were followed by a lively question and answer session as the audience considered the multiple dimensions to the issue.

The full debate as well as question and answer session can be viewed here.