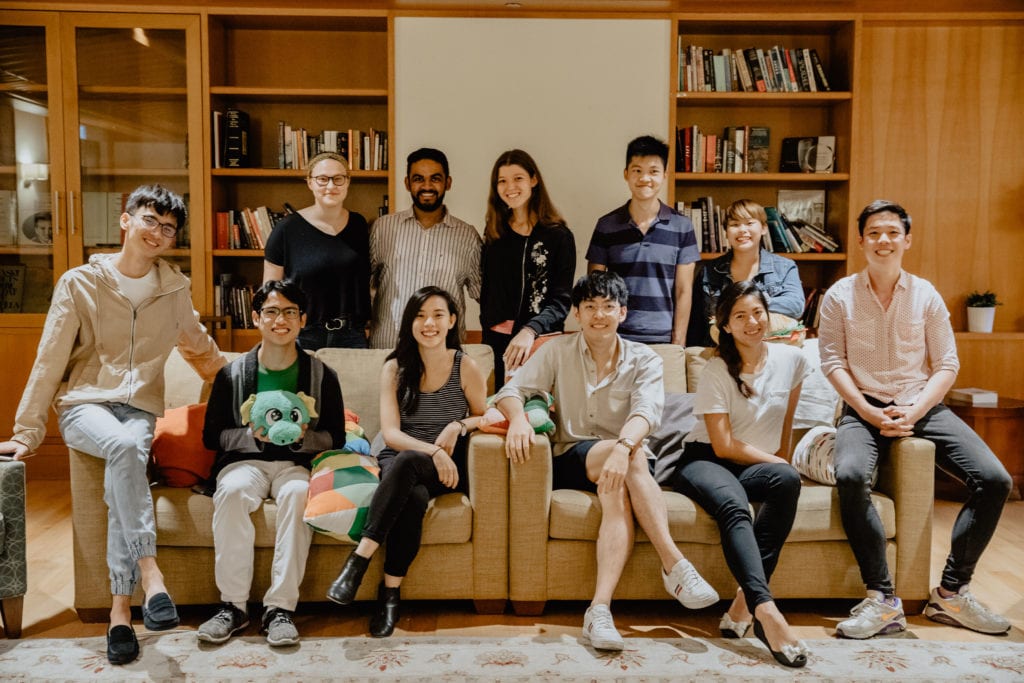 The executive board of the current Yale-NUS Student Government. Image by Ashbel Chioh for Yale-NUS College.

The Yale-NUS Student Government strives to represent all Yale-NUS students, abiding by the core principles of transparency, accountability, and efficiency. They act as a bridge between the administration and the students while addressing any issues that arise in Yale-NUS and work for the betterment of the College.

A concurrent degree programme student with the Lee Kuan Yew School of Public Policy,  Rachel was appointed Director of Finance of the Student Government in Semester 2 of Academic Year 2018/2019. She has learned a lot about Yale-NUS, as well as built strong relationships with the faculty and the staff through her experiences. So, she wants to give back to the College by taking on more responsibility than she had before. “I want to take this experience and to hopefully run an efficient, accountable and responsive government that can accurately represent the wants and hopes of the student body,” Rachel said.

Hazeem was the Student Government Director of Events in his first year. During his experience, he was involved with student discussions involving student finances, dining, and student wellness. He wanted to continue being in the Student Government to take part in negotiations and ensure that the best compromise can be reached.

“The team I work with are so willing to help and support each other to keep pushing and serving,” he remarked, elaborating on why he chose to rerun this year.

Since the beginning of the year, Rachel and Hazeem have been working with the Admissions and Financial Aid office to render the process of applying for and receiving financial aid smoother and more transparent for the Class of 2023. They tried to work out the best method to convey community needs to the Admissions and Financial Aid Office, keeping in mind   the constraints within which the Office has to work.

To further tackle this, the Student Government has created a Financial Accessibility Committee, which will soon be open to students to join. Its main goal is to ensure that the College can provide enough jobs to students who need to work to contribute to their Yale-NUS education cost, also known as the Student Effort Contribution.

Besides financial accessibility, the team also tries to improve accessibility in other areas, such as access to the College gym. “Our Co-Directors of Athletics Sophia Elalamy (Class of 2022) and Dominic Chan (Class of 2022) have been doing a great job in making the gym accessible in partnership with Athletics,” Rachel added. For instance, Sophia started running a series of fitness courses with Keith Yap (Class of 2020) that welcomes people of all fitness levels.

Contract staff wellness is another area of concern. “The general belief of the Student Government is that all members of our College should feel valued and dignified,” Rachel remarked. According to Hazeem, this entails not only providing contract staff with a safe working environment by ensuring rules and regulations are implemented, but also “making them feel safe and cared for.”

For instance, last year, Hazeem initiated a conversation between the cleaners, their management, and the College to ensure that the staff feel valued, dignified, and safe on campus. More specifically, the conversation was about how to make the College more accommodating for the cleaners when they want to take a break from their work.

Rachel also aims to make sustainability initiatives in College a priority of the Student Government. She believes that Student Government “has the ability to nudge both administration and our students towards building a more environmentally friendly campus.”

The Student Government is also brainstorming ideas in collaboration with the representatives of the Student Committee for Sustainability and eco-conscious student organisations on campus. They plan to establish new guidelines to encourage students to organise events that are as sustainable and single-use-free as possible. For instance, student organisations are encouraged to cut down on plastic waste by going digital instead of distributing merchandise or coupons.

The Student Government was completed with the elections for the Senate and Judiciary, the results of which were released on 4 September.