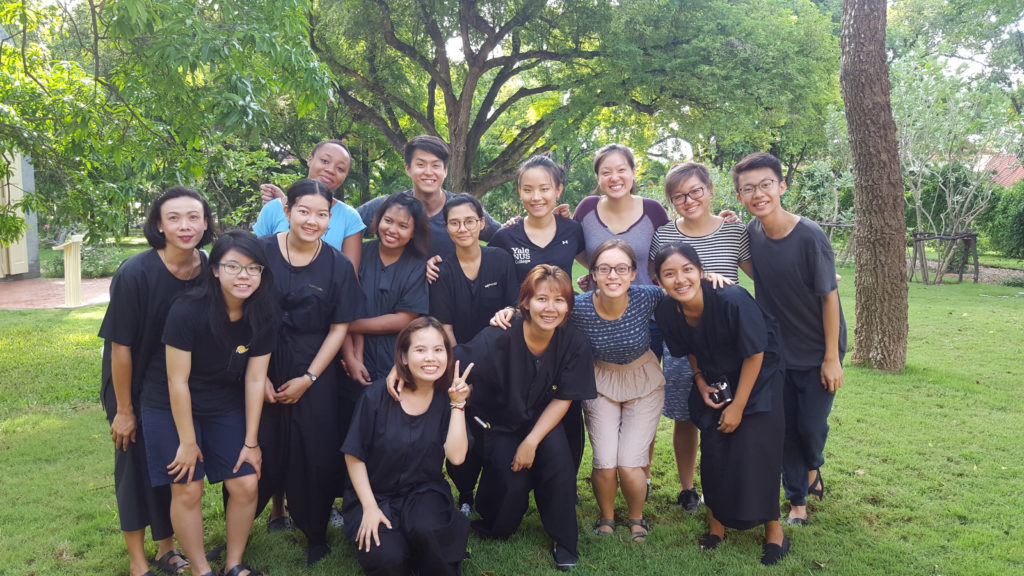 Last summer, a team of Yale-NUS students spent two months in Hua Hin, Thailand with two students from the Yale University and Dean of International & Professional Experience Trisha Craig, as part of their involvement in the Cultural Heritage as Sustainable Development (CHASD) project with the Royal Thai Palace. Funded by the Henry Luce Foundation, the internship was designed and organised by Dean Craig and Professor of Humanities (History) Naoko Shimazu, together with the Director of the Palace Museum, Ms Klaomard Yipintsoi.

The team consisted of six Yale-NUS students across different classes and majors.

For Varissara Charassangsomboon (Class of 2020), who is planning to major in Philosophy, Politics & Economics (PPE), this internship was an obvious choice after she developed an interest in heritage conservation during her Week 7 Learning Across Boundaries (LAB) programme in Penang, Malaysia, which focused on the history and heritage conservation of Penang. The Week 7 LAB is a flagship programme offered by the Centre for International & Professional Experience (CIPE) that takes students, faculty, and staff out of the traditional classroom setting into different parts of the world to engage in experiential and multidisciplinary learning.

“Heritage sites are valuable connections to the past, and they contribute to our sense of pride and identity. The conservation project at Mrigadayavan Palace appealed to me because it gave me an opportunity to experience and be a part of the conservation effort of a heritage site. Additionally, it was in Thailand so I felt especially passionate about it,” shared Varissara who hails from Thailand.

Mrigadayavan Palace was constructed between 1923 and 1924 as a summer, seaside retreat for King Rama VI set on approximately 1400 square miles of land. After the king’s death in 1925, the Palace was abandoned for forty years. In recent years, it has been managed by the Border Patrol as a museum with various attempts to restore the buildings and manage the coastline and forest in a sustainable fashion. The team was tasked with developing a roadmap for sustainability over the summer.

Another student in the team was History major Maline Bungum (Class of 2019).  Maline was also interested to examine how the palace has changed over the years and the challenges in preserving its heritage.

“I was intrigued by the Palace’s trifold conservation of its cultural, architectural and ecological heritage, and the promise of a multidisciplinary team was a big draw for me. As a History major, I was also excited by the chance to conduct ethnographic research on Mrigadayavan’s growth from a seaside summer palace to the tourist destination that it is today,” she shared.

The project also appealed to Dominic Choa (Class of 2018), an environmental studies major because he was interested to see how sustainability is increasingly a key consideration in projects. “At a practical level, I wanted to know how operations can be improved from a sustainability perspective, which was what we got to work on and test out over this internship,” Dominic noted.

During their internship, the team had the opportunity to conduct research and develop proposals to assist the Royal Thai Palace in achieving its trifold goals of the conservation of its cultural, architectural and ecological heritage. As part of their research, they had the opportunity to visit various key historical and cultural sites, such as the Ananta Samakhom Throne Hall.

Maline appreciated knowing that she was making an impact with the work she did.

“As student consultants, the qualitative and quantitative data that we gathered wouldn’t just remain on paper, but serve as justification for implementing the changes we hoped would help the Palace achieve its vision of being a learning centre for heritage conservation,” she reflected.

For Varissara, a key takeaway was realising that heritage conservation was more than simply preserving the physical sites or buildings.

“I came to understand that heritage conservation is not just the preservation of buildings, but is the effort to keep a piece of history alive. Among other things, the preservation of musical traditions, the restoration of the local ecology, and the continuation of historical rites and traditions all contribute to preserving the Palace’s unique ambience and character,” she shared.