By Kevin Low | Images as credited

After graduating last year, the alumni from the inaugural Class of 2017 chose many different paths: some went on to find gainful employment in various organisations around the world, while some chose to pursue further studies in various fields, from literature to life sciences and medicine. At Yale-NUS, Tsoi Sau Yee majored in Life Sciences, with a minor in Psychology. She found interest in the intersection of these two subjects – neuroscience – and she is now doing a Master of Science by Research in Integrative Neuroscience at the University of Edinburgh in Scotland.

Sau credits her classes at Yale-NUS for helping her overcome her fear of speaking up, especially in class. “There are electives here which are sometimes just a small group of people discussing a paper,” she said, “and because I don’t have as much neuroscience background as some of my classmates, if I don’t speak up and ask questions, I won’t get as much out of the class.” She also found that the many class presentations she had to do while at Yale-NUS gave her valuable presentation skills. This includes “basic things like not putting big chunks of text on slides, or not just reading from a script and not engaging the audience,” she said.

An aspect of Yale-NUS that Sau misses is the sense of shared community. Sharing a fond memory, she recalled, “Once during a stressful finals period, Neil Chan, one of Saga College’s Dean’s Fellows, organised a picnic in the Saga Courtyard, and he brought his guitar. It didn’t matter that I didn’t know half the people there, because I was just singing along and enjoying the moment.” 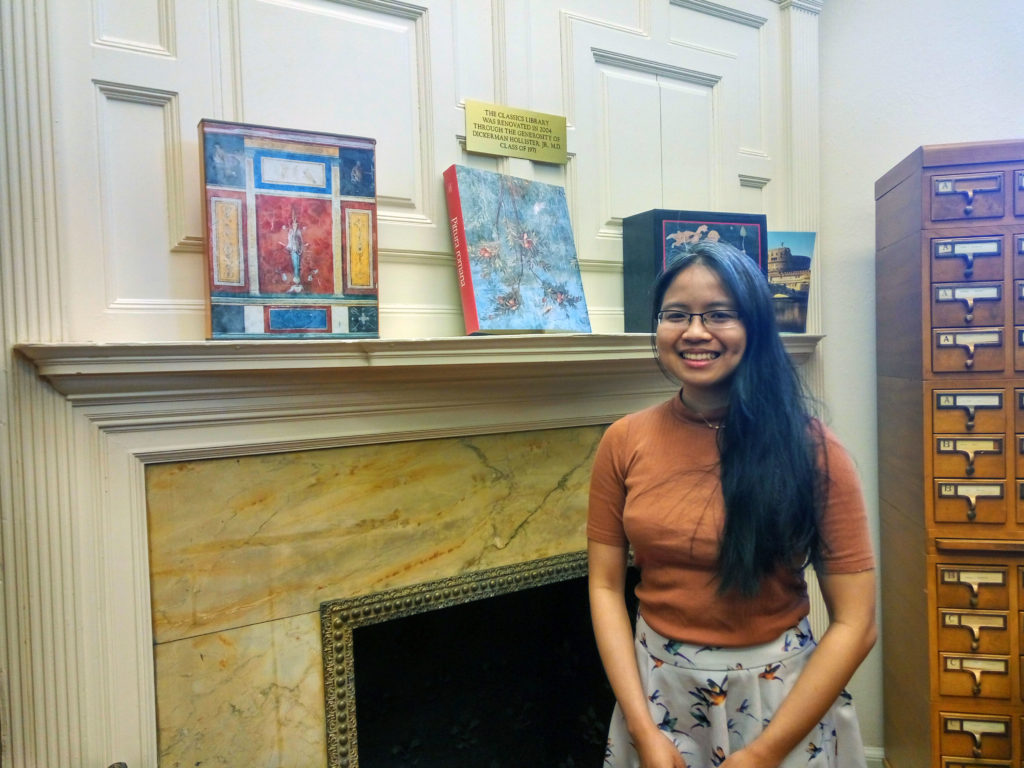 Literature major Carmen Denia is now studying at Yale University for a Master of Arts in Religion, with a concentration in Religion and the Arts (Literature). The wide variety and flexibility of classes she could choose to tailor the syllabus to suit her own academic interests was a key reason for taking up this course. In this first year of her two-year programme, she is taking classes in language, art history, and philosophy, in preparation for reading the actual literature courses in her second year.

Carmen appreciates the familiarity of Yale and the New Haven campus – not just in the geographical sense, but also the familiar faces of the College’s extended family. She listed her various encounters, “I went to [inaugural Yale-NUS President] Professor Pericles Lewis’s house for Thanksgiving and had dinner with his family. I met [inaugural Dean of Faculty] Professor Charles Bailyn when he was hosting the [then] new Dean of Faculty Professor Joanne Roberts and invited Yale-NUS alumni to meet her. Oh, and I bumped into [Yale-NUS Governing Board member] Dean Marvin Chun at Handsome Dan’s birthday celebrations!” (Handsome Dan is the name of the bulldog who serves as the mascot of Yale University’s sports teams.)

On how her Yale-NUS College experience has helped her get to where she is today, Carmen spoke at length about the close interactions with Yale-NUS faculty members. Notably, the professors teaching the Common Curriculum were very accommodating to students who did not have the prerequisite background. “I came to Yale-NUS intending to major in physical sciences,” she said. “My literature professors were very kind – they didn’t kick me out when I approached them and asked, ‘What’s a theme?’” To Carmen, the faculty at Yale-NUS were more like mentors. “They very much care about you as a person, not just a student,” she said. They also encouraged her to take classes outside of literature, which she is grateful for now, as some of these classes proved helpful in her current art history classes. Now studying in the Doctor of Medicine (MD) Programme at Duke-NUS Medical School in Singapore, Ang Yukai was a Life Sciences major who knew he wanted to pursue a further degree after a bachelor’s. He decided on the MD Programme because it allows him to pursue his academic interests while providing him the gratification of making a difference on a personal level. Having been previously unsuccessful in applying to the Yong Loo Lin School of Medicine at the National University of Singapore (NUS), Yukai is grateful for the second chance to become a doctor. However, he recognises that he was “a very different person” when he applied to that programme in 2012. “My decision to apply to a medical programme is a much more informed and mature one now, than the one I made six years ago,” he shared.

Yukai said that the various opportunities that were available at Yale-NUS allowed him to work towards his goal of becoming a doctor. Through various research projects with faculty connections at NUS, he gained a greater exposure to public health issues, and even had the opportunity to shadow doctors on the job. He has also gained a greater appreciation of the importance of mental health. “As a doctor, you might not be able to cure the disease one hundred percent of the time,” he said, “but you can always do your best to empathise with the patient, and not trivialise the pain and suffering they might be going through.”

What Yukai really enjoys about his MD programme is the rigorous and unrelenting mental stimulation. His first year is spent on intensive foundational theory classes, and he is looking forward to the practical aspects of medicine which will begin in his second year. Even amidst his hectic study schedule, Yukai still finds time for his passion for rock-climbing. He also participates in Duke-NUS community events such as joining his classmates at movies, singing karaoke, and once had a go at go-karting.

When asked about advice that they could offer their juniors thinking about applying to graduate school, all three alumni gave advice with a common theme – don’t rush and plan early.

“Don’t just rush into doing graduate school because you think that is the default next step,” said Sau. “There are a lot of things you should consider, not just the prestige of the school.” Carmen agreed, adding that one should have a reason for going to graduate school apart from ‘becoming a professor’. “Statistically speaking, most people who go to graduate school and get PhDs don’t become professors,” she said. “You need to have a reason to get you through the tough times, a reason why you enjoy doing the research in the moment, and not just for some far-off goal.”

Once you are sure you want to enrol in a graduate programme, you need to start planning extensively – which means planning early. “Browse around different programmes and identify things you might be interested in,” said Sau. “For the UK system, there are taught programmes, which are more lecture-based, and research programmes, which are more focused on individual research. So look carefully at the programme outline – make sure you know what you’re getting into.” Yukai shared, “I started planning in my second year of college. I decided to take the Medical College Admission Test (MCAT) in my third year, so that as a contingency, I would have also been able to take it in my fourth year if I didn’t do well the first time.”

“A lot of people come into graduate school thinking it’s going to be more ‘school’ – it’s not,” quipped Carmen. “It’s really more like a job. From nine-to-five, you do your research and your product at the end is your paper. You need to be sure that this is what you want to do for the next few years.”