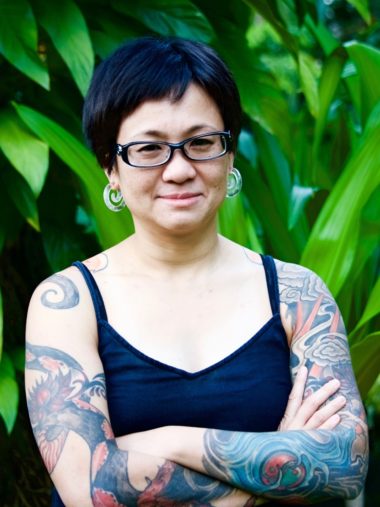 Associate Professor Lynette Chua is a law and society scholar with research interests in legal mobilisation, legal consciousness, and rights, power, and resistance. She is Associate Professor of Law at the National University of Singapore (NUS), with a joint appointment at Yale-NUS College as Rector of Elm College and Head of Studies for the Double Degree Programme in Law and Liberal Arts. She received her doctorate from the University of California, Berkeley, in the Jurisprudence & Social Policy Program, Bachelor of Laws degree from NUS, and Bachelor of Science from Ohio University, E.W. Scripps School of Journalism.

Assoc Prof Chua is conducting two research projects, which differ in empirical focus but share the same intellectual concern that runs through all of her research, namely, to interrogate the dynamics of legal power, social norms, and human agency. One project, titled “Governing through Contagion” (in collaboration with Dr. Jack Jin Gary Lee), is primarily a historical ethnography of how colonial empires and post-colonies combat contagious diseases, and how their strategies of control produce and emerge from a web of relationships among humans, creatures, and legal and other technologies.

The other project is a qualitative, empirical study of “filial piety laws” in China, Taiwan, Vietnam, and Singapore that requires adult children to provide financial maintenance and, in some instances, emotional care, to their elderly parents. Assoc Prof Chua is interested in whether and how such laws are used, and how they relate to shifting practices of filial piety and intergenerational relationships, as the respective societies undergo changes to population flows, economic development, and family structures.

As part of her ongoing interest in legal mobilisation, Assoc Prof Chua is also writing a short monograph tentatively titled, The Politics of Rights in Southeast Asia, as part of Cambridge University Press’ Elements series on Southeast Asian Politics and Society. In this monograph, she will focus on the rights-culture-politics nexus in Southeast Asia. In particular, she will investigate the contested nature of rights, exploring the debates over who are entitled to rights, what sorts of rights they should have, and even who gets to decide on such issues.

In addition, Assoc Prof Chua is the author of The Politics of Love in Myanmar: LGBT Mobilization and Human Rights as A Way of Life (Stanford University Press, 2019), and Mobilizing Gay Singapore: Rights and Resistance in an Authoritarian State (Temple University Press, 2014). The Politics of Love in Myanmar is an ethnography of how human rights are collectively mobilised and practised on the ground, how they relate to larger social forces, and how the emotions and relationships that people have with and through human rights perpetuate their practice and construct their meanings. The book was awarded the Asian Law & Society Association’s 2019 Distinguished Book Prize, and the Honorable Mention for the 2019 Gordon Hirabayashi Human Rights Book Award by the Human Rights Section of the American Sociological Association (ASA). Mobilizing Gay Singapore is an ethnographic study of Singapore’s gay and lesbian movement, and the complex role of law and meanings of rights under authoritarian conditions. Mobilizing Gay Singapore received the 2015 Distinguished Book Award from the ASA Sociology of Law Section, and the 2015 Book Accolade for Ground-breaking Matter from the International Convention of Asian Scholars. It was selected as a finalist by the Socio-legal Studies Association for the 2015 Hart Socio-legal Prize for Early Career Academics and the European Southeast Asian Studies Association for the 2015 Book Prize.